This was it. The big race we'd been training for. Elizabeth's first half marathon! Our birthday race. To say we had high expectations would be an understatement. Despite lingering calf issues and a minor cold, I was feeling ready and excited!

Unfortunately, this race went the way running things seem to be going lately for me. I was chock-full of Sudafed and Advil and race day dawned hot and humid. This was going to be a battle.
But let's start at the beginning.

Matt, Elizabeth and I arrived in Fort Lauderdale around 1pm.
We dropped our things at Oden's and then went to lunch, then finally to the expo. The A1A expo is always excellent, and this year was no exception! I made sure to stock up on free samples and half-priced Gu while dragging Elizabeth into a million photos. 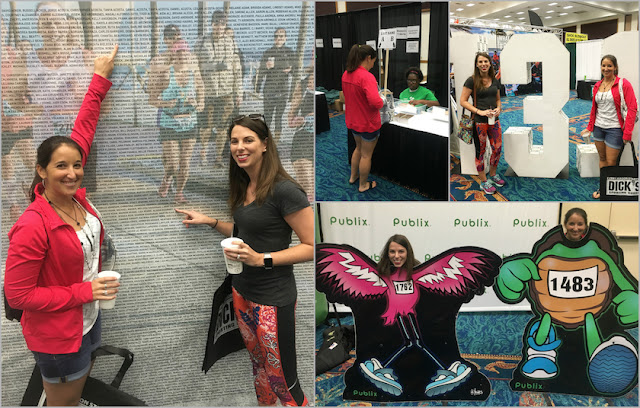 Of course, finding our names on one big wall wasn't enough; we had to sign another! We also found our names on a Lexus, but I didn't get a picture of that one. 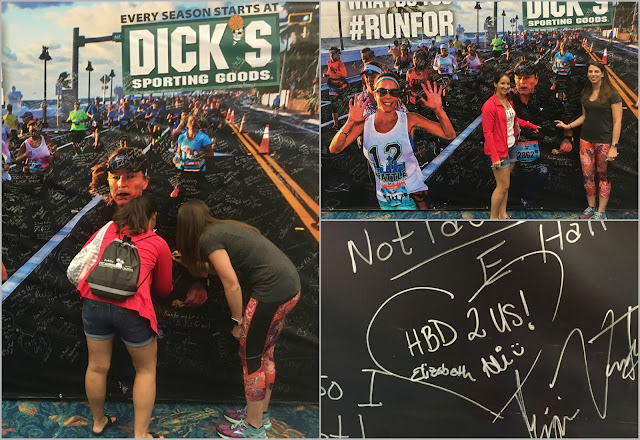 After the expo, we relaxed at Oden's until dinnertime. I had a huge baked potato and chopped salad and felt full and well-fueled. We laid out our things for the morning and got to bed at a decent hour.
Elizabeth is new to "flat runner" pictures and was perplexed when I added all my accessories, Gu, etc. She asked, "So, should I put everything I'll use on race day?" and tossed the box of anti-diarrheal into her pile. We died.

I woke up easily at 4am and drank a Starbucks Espresso Doubleshot in bed. When I felt a little more awake, I made my UCAN and had most of a pop-tart. We were out the door by 4:50 and by 5:05 we were parked in our usual off-site spot.
After a long wait for the bathroom, Elizabeth and I packed our pockets and gave Matt our castoffs. He left us before the start gun because he was going to put Skirt Sports discount cards on cars before he went back to rendezvous with Oden and get a bike, etc.
Elizabeth and I made one more bathroom stop and then the race began! The beginning was so crowded that we had to dodge, weave, and sprint a bit to stay together. It was frustrating. Although we started closer to the front than I usually do, we were still behind a lot of people who were walking within the first quarter mile...many of them did not use proper etiquette, which aggravates me!
My calves felt a bit tight but not bad. At mile .19, we had just crossed the train tracks when we heard the train! A loud whistle sounded not far from us and the crossing lights and bells went off. Yes...a train cut through half the runners less than a quarter mile into the race!

(I borrowed this video from a Sub-30 buddy. Those runners waited 10 minutes for the train to pass, then got a second start with adjusted times. I'm so glad we were past it when it happened!)
By mile 3, my legs felt great. The humidity was making it hard to steady my breathing, but for the first six miles everything felt doable. We were keeping a good pace and the crowds had mostly cleared up, so there was no more dodging.

We passed Matt and Oden around mile 4; Matt had his OneWheel and Oden had rented a bike.
Around mile seven the humidity and all the unintended fartleking caught up with me. I couldn't get my heart-rate under control and I felt sick. I had goosebumps even though I was really warm; my stomach hurt; I felt dizzy. I had told Elizabeth not to let me walk if my calves were "annoying" but not painful. But this was different.

I hated to do it, but I had to walk. I had a Gu, hoping the sugar would help, and it did, but it also made my stomach hurt more. We were pouring water on ourselves at every water stop but I was fried.
I feel very guilty about all this. Elizabeth was great. She offered to call Matt to see if he could get my inhaler to me, but the issue wasn't really asthma-related. I kept apologizing and she finally told me to just STOP and have fun and let's do this together, who cares what happens to our goal? She was the best, but I felt so defeated. We had started out with lots of cushion to meet our goal, but I could see it slipping away from us...and it was my fault.

Around mile 9 I stopped at a medical tent for ice and shoved it down my bra.
Around mile 10 I saw an old college friend volunteering at a water stop and forced a sweaty hug on her; she and I were English majors together and since then have bonded a bit over running, and seeing her brought back to me all the beautiful, empowering ways running has changed me, and that helped me mentally the rest of the race.

Around mile 11 we saw Matt and Oden again and I asked them to get us Coke if they could. I also realized I had somehow managed to get gum in my eyebrow.
And then, finally...oh god, FINALLY, we got to mile 13. Steph and Oden and Matt were there. Elizabeth and I finally picked it up and "sprinted" through the last 10th.
I immediately got a giant bag of ice from the medical tent and put it on my neck, then chugged the Coke the boys had picked up for me.
I honestly don't know what happened to me out there. I mean, I know the heat was no joke; we saw a handful of runners pulled off the course on stretchers, but I've never experienced those symptoms before. Maybe the Sudafed had dehydrated me more than I expected? Maybe I was just not as strong and prepared as I thought?

What was so tough mentally was that my legs felt good and when we were running, they wanted to run fast, but my body just couldn't take it. My heart-rate would skyrocket after just a couple minutes and I'd have to walk again.

I am frustrated that I couldn't power through and hold onto that 2:20 goal. This feels like BDR all over again; I feel fired up to run another half at a pace I know I can feel proud of. And I hate writing race reports that sound like they're full of excuses, but it is what it is. We got out there. I did the best I could and Elizabeth stuck with me when she could have easily powered through faster on her own.
We finished. There were times I thought I might DNF but we finished. And what's more, we finished together, just as we planned. 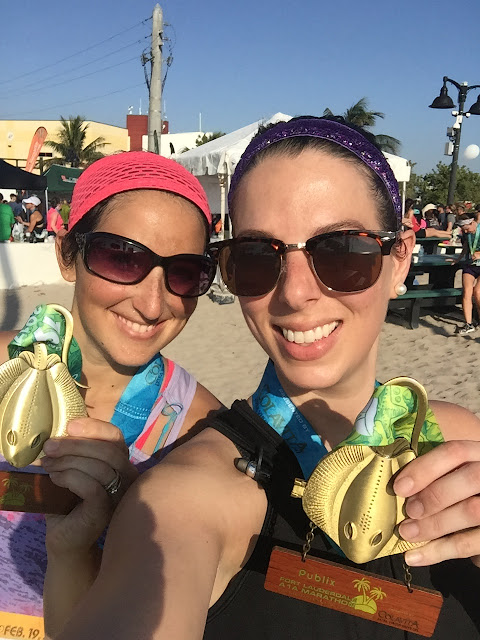 After we made it back to Oden's and showered, we went for brunch at the Original Pancake House, where I had a plate of blueberry pancakes and Elizabeth had a giant apple crepe. Food makes everything better!
This may not have been my best race, but I think Elizabeth feels accomplished for finishing. She does seem a little dubious about my insistence that we do another. Although it was a far cry from my past performances and downright painful at times, I'm already thinking about signing up for A1A again next year! I just can't stay away.

Oh, and here is a video of us at the finish because I know some of you like that!