Like I posted this weekend, I signed up to run at Gasparilla without really thinking it through, but now that the race is over, I'm so glad I gave in to my FOMO!

I got permission to leave work a little early on Friday and I hoped that would mean I'd miss traffic. I did get caught in some near Sarasota (it always slows down there due to construction) but I made it to Tampa for the expo with plenty of time. (Last time I ran at Gasparilla, we literally had to run through the doors as they were closing!) This leg of the trip took about 3.5 hours but it should have taken 2.5.

Going to an expo alone isn't very fun. I signed the Dick's Sporting Goods wall and found my name on the other big wall - expos have a thing for giant walls lately, huh? - got my bib and shirt, and called it a day. 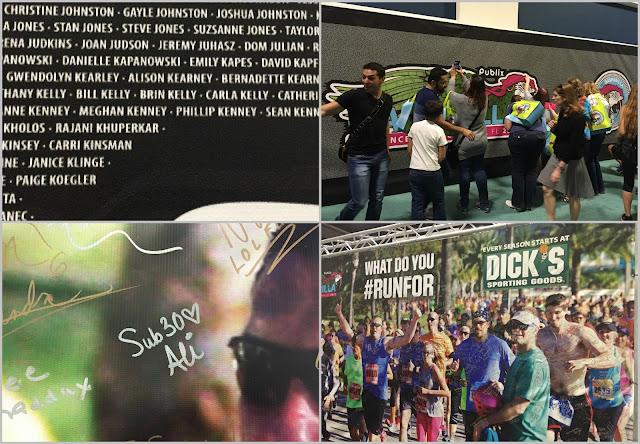 I drove another hour to Jenn's, where Tommy had made baked chicken and risotto. I would have gotten photos but I was enjoying catching up too much to get my phone out; and besides, I had pretty much cleaned my plate before I remembered to take a picture. It was the best pre-race dinner I've had in ages!
We stayed up much too late, but I slept really well and was up easily at 4:20am and out the door by 4:45 to head back to Tampa for our 5:45 photo op!

My plan had been to park in the convention center's garage, but all the streets were already closed. Instead, I parked over the bridge in a Walgreen's parking lot and hoped no one would tow my car. I sipped my UCAN while I walked, and ten minutes later I found my people!
Now, although I've met a number of my Sub-30 friends in person and run races with some of them, I've never run with them in a race. This would be the first time I stuck with a pack, and the first time I'd be doing intervals. I literally had no time goal in mind for this race and just wanted to have fun and not exacerbate any aches left over from A1A, so this seemed like the perfect time to be introduced to the Galloway method.
Running with these people was the most fun I've had on a race course in a long time. Everyone was
joking around and our spirits were high. We were doing 3:1 intervals, and every time it was time to walk, Andy or Will would shout "WE'RE WALKING!" or "RUN, RUN! WE'RE RUNNING LET'S GO!" at the top of their lungs. I'm sure we were incredibly obnoxious to some, but we also adopted some other runners who liked our style. I adjusted my pace a few times to run with various people in our group and tried to talk to everyone and meet everyone. It was exactly what I had wanted!
By the way, the weather was perfect. Mid-60s, overcast, and breezy! I was a little annoyed that it was so gorgeous when just last weekend it was so bad. I know that next time I drag Elizabeth into a half marathon, we'll travel north instead of south.

I got a little frustrated with the intervals around 3 miles; I felt like it was taking us forever to get anywhere and I was impatient. This feeling faded, and this experience led me to consider trying intervals for long runs, but I'd likely do a 5:1 or 6:1 ratio. Anyway, at mile 6.5, we paused by an inflatable dinosaur because his sign matched the back of our shirts.
I've never paused in a race for pictures before, so this was another first. It's just a completely different experience to run a race with this mindset!

Here's the best thing about running with and belonging to this group: they truly are the most supportive people I've ever met. I watched as the "leaders" of our pack made sure no one was left behind. When we walked through water stations, they kept an eye out for stragglers before urging us to run again. They made sure to run with the group, not just ahead, to keep everyone in it together. I honestly felt so comfortable and accepted, even with those I had only just met; for me, that's really saying something because I tend to be really aloof and distant when I meet new people. Sub-30 is all about being together and working as a team to accomplish our goals.

Anyway, at mile 7, I began to pick up my pace a little and ended up running the rest of the race with Kim. She was battling a bad cold and had the 5k to run right after the 15k, but she was still out ahead of the group. By mile 8, the shouts of "AND WE'RE RUNNING!" were fading away, so we just followed her watch and ran the rest of the way together. 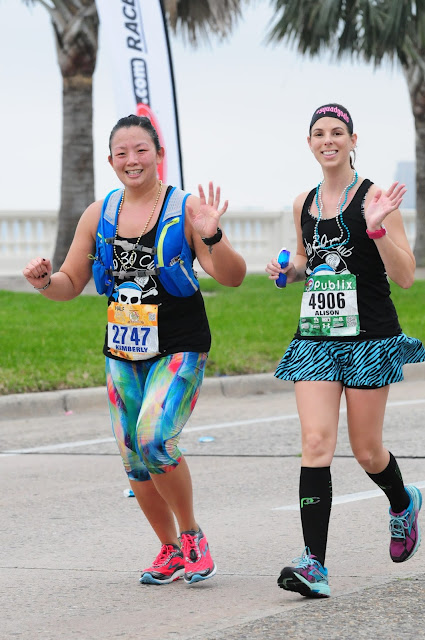 I crossed the finish line just before the 2:00 mark with a pace of 12:21; this may be the slowest I've ever run a race, but it was also the most fun. My feet and hips did hurt a little; I wore my Ravennas as a kind of test of my calves and in the end I think this particular pair is definitely ready to be retired, unfortunately.
After we finished, Kim and I got in line to meet Meb. I shook his hand, told him what an inspiration I find him to be and thanked him for being there, and we took a photo. Then we got our medals and met the rest of the group.
A little while later, we all gathered again because someone had managed to convince Meb to take a picture with all of us.
Afterward, I had to head out. I needed to get to Sarasota for Scott and Robby's engagement party. I wished I could have stayed longer, and I think maybe the Challenge will be in my future, but this race was just what I needed. It was wonderful to leave stress and ambition behind and actually just run for the joy of it.
The rest of the group went on to do some awesome things this weekend, including breaking 2:00 in the half marathon (that was Andy and Therese's goal and they killed it). I'm glad I got to be there to experience some of the fun, and I hope to do it again next year.