Recently, I heard that there is research coming out about the development of a series of vaccines to treat Celiac. I signed up for updates and information - and to maybe take part in a trial - through Beyond Celiac. Now, I get interesting updates in my email every week.

This week's email struck a little nerve. They sent the infographic below: 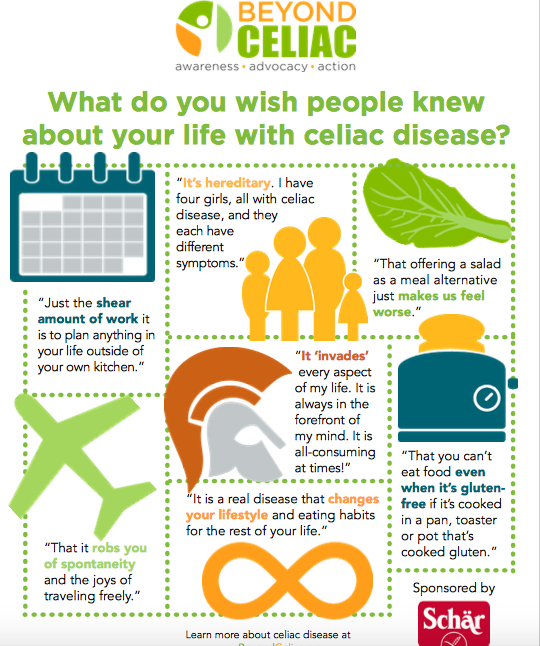 Apparently May is Celiac Awareness Month. Who knew? Actually, it's ironic that I didn't know because I was just about to write, "I've lived with Celiac in my family my entire life and I've lived with it personally for 20 years, so there's not much I don't know."
My sister was diagnosed when she was 18 months old. This was back in the early '90s when Celiac was pretty unheard of. About eight years later, research came out about the heredity of the disease, and our entire family got tested.
My blood test came back positive (no surprise - I was really underweight and had stomachaches all the time) and we confirmed it with an endoscopy.
But this post is not about my diagnosis story or how I adjusted or any of that. I wanted to talk about how I relate to these "I wish people knew" stories.

Even though I've had Celiac my entire adult life, I can see how I have to live differently than others in ways people often take for granted. The truth is, I don't consciously often think about my life with Celiac, even though I think about Celiac almost daily.

If we're going to try a new restaurant, I look up the menu online to see if I can eat anything there. I avoid certain types of food - like Chinese takeout - entirely. I eat before events - like friends' weddings or the Triumph event I was invited to speak at in March - because I never know if I'll be able to have what's served.
I am not shy about asking if I'll be able to eat what's on the menu, but I do feel badly asking for something special to be made, so I just pack a snack.

My purse is always full of snacks for that reason!

I never feel like I can be spontaneous and go to a non-English speaking country because I'm too afraid I'll end up eating food I can't have. When I chose to study abroad in college, there were two main factors in my country of choice: can I speak the language and therefore eat safely, and were people I knew going.
I am not "healthier" for eating gluten free in the sense that I absolutely love junk food and sugar. I'd prefer to eat like a 5-year-old at a birthday party daily. The only reason I'm "healthier" for eating gluten free is that, for me, gluten is damaging.

I will say, though, that Celiac is not all-consuming. It does not "invade" every aspect of my life. That's a sad way to live. Yes, reading labels and asking about ingredients is second-nature to me, and Celiac itself comes up almost-daily in conversation with my family...
And of course, anytime I'm going to eat, it becomes a factor. But I do not spend hours of my life thinking about Celiac and how it affects me. I hope the person who sent in that note is a new diagnosee and can find balance and peace, because their life sounds exhausting!

These days I know lots of people who have Celiac, but growing up it was just me and my sister. It's kind of fun to be able to trade expertise with friends now...back in the day, tasting GF food was expensive and often disgusting.
My mom baked bread for Stephanie and me. We ordered food from Canada (Kinnikinnik was our first foray into gluten free donuts) and it was a big deal when a shipment arrived. I remember looking at the catalogue and circling things with Steph as we decided what looked worth trying out. We're both in the habit of sending each other photos of new GF foods we find in the grocery store because the novelty hasn't worn off.

Anyway, the best thing Celiac has done for me is make me an adventurous eater. If I can eat something, I will try it at least once.

I wracked my brain for my own "what I wish people knew about Celiac" and I think it's this: 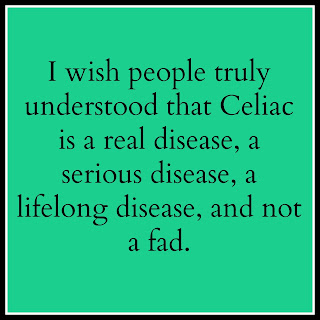 I am living a happy, full life with Celiac, and as far as autoimmune diseases go, Celiac isn't really that bad. It's not too hard to avoid gluten and thereby live a healthy life. I don't mean to be dismissive of it, though; adjusting to the diet can be tough and the symptoms can be awful and dangerous; I'm just at the point in my life where it's all second nature.

The gluten free fad has been a double-edged sword, and I just wish people were more aware that the condescension for people who eat gluten free can be harmful for those of us who need to be able to trust ingredient lists and labels when shopping and servers and chefs when we eat out.

Email ThisBlogThis!Share to TwitterShare to FacebookShare to Pinterest
Labels: celiac