Time for Some Perspective

When I watched Kristina's April review video, I realized April is the first month that I really moved out of the early stages of recovery and into "training" (or something like it). I thought, Hey, I should review April, too!

Then I saw her comment on my Riverfest 5k recap and had a moment of clarity. As Kristina pointed out, I have been truly back to consistent running for about three months now and am already only 2 minutes (and change) away from my all-time 5k PR. And actually, most of the progress I've made since surgery has been made in this past month; I am improving exponentially. That's pretty amazing.

My mind is so often in a place of overthinking, which means I analyze each run with blinders on, and I lost the big picture a bit. Kristina's comment reminded me that in the grand scheme of things, I'm doing really well. There will still be setbacks, but things are generally moving forward. And quite smoothly, at that.

So, April.
This month continued a trend of increasing mileage, increasing consistency (running more than twice a week), and increasing pace.

This was the first month I experience a run during which I didn't think about my legs because they felt so normal I forgot to think about them. I weaned myself off walk breaks.

My legs seemed to just wake up and get strong in April. I raced a 5k and was surprised at my performance. I faced my fear of the bridge I used to run all the time (did I mention it was on that bridge that I first experienced my compartment syndrome symptoms?) and got back to some old routes I hadn't run in over a year.

April's mileage is beginning to look closer to what I was running pre-CS. 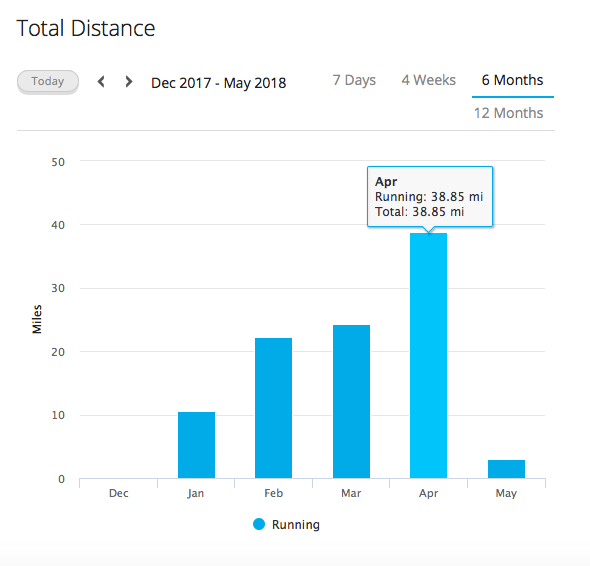 An even better longview takes into account the last 12 months. I felt good and normal again in April, and when I look back I see how long it's truly been since I've gotten to experience that kind of normalcy. Now that I'm running again, I sometimes forget how little I was running before. My mileage in April 2018 more than doubles my mileage in the summer of 2017.
Looking back on this month is very rewarding. I feel like I've come a long way. I can see a pattern of improvement and I plan to stay on that path. I don't feel 100% normal all the time, but April is the first month I've felt normal most of the time, and that's worth celebrating.