Chattajack has come and gone; this year was Matt's fourth consecutive time completing the 31+ mile paddle race. This year was a little different because he raced his OC1 (outrigger canoe) rather than a stand-up paddleboard. The new craft offered some new pros and some new challenges, too.

We spent all of last Thursday driving up to Chattanooga, Tennessee. One nice thing about this race is that it makes seeing Quack and Anne Marie a yearly tradition. This year we also got to meet Lucy:
The weather was rainy and cold, and I opted to sleep in Friday rather than attempt to run through the rain while Matt partook in a pre-race paddle clinic led by Johnny Puakea, the designer of the Puakea outrigger canoe (which Matt paddles) and one of the best paddle coaches in the world. (He's usually in Hawaii, so Matt had to take advantage of the chance to meet him and get some tips.)
The rain and cold weather had us hoping the current from the dam would be faster, but Saturday dawned with a diminished flow. 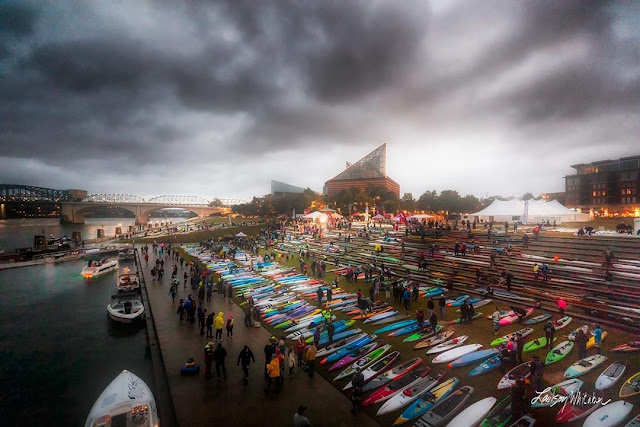 Surfskis and outriggers have a later start time than other paddle-craft, so we arrived at 7:30 for the safety meeting as usual, but had to wait until 8:30am for Matt to get on the water. He didn't actually start until 9am (EST).
Matt is the guy in the pink hat carrying a giant boat down the dock in this video.
Matt knew he'd be faster this year, as the OC1 is a faster craft than a SUP board. This meant that despite the later start, we could still anticipate a finishing time around 2pm (CT).
This year, I was driving my own car and I was by myself. This made catching Matt along the route much less stressful. As usual, I caught him at the 10 mile mark, Suck Creek, about 90 minutes into the race. He was in a line of OC1s that had formed a draft train.

Matt hadn't gotten to practice drafting other OC1s much because his local paddling friends don't have them, so I was pleased that he'd found a train and seemed to be doing well.
The next stop was mile 20, Raccoon Mountain. I'd missed this stop last year and was determined to get to it because it's so close to the water and a great vantage point. Despite knowing how absolutely difficult it was to find, and leaving plenty early to get there, I still nearly missed Matt at this stop.

Basically, the Sherpa guide doesn't clarify that you need to drive toward the Raccoon Mountain boat ramp. If you go toward the tourist center or pump station, you end up UP the mountain and far from the river. With rain and fog added to the mix, I was pretty turned around and lost at this point. My GPS took me off the interstate an exit early, and when I fixed it and hopped back on, I'd already lost 10 minutes. Then I made two wrong turns on the mountain itself and got all the way to the "top" before realizing I needed to find the boat ramp.
I was nearly in tears at the thought of missing Matt here again, but I found the boat ramp and parked within literally minutes of his passing. I was out of the car and running around in the parking lot when I saw him.

I yelled, "GO MATT GO! I GOT LOST THREE TIMES BUT I FOUND YOU THIS YEAR!"
To which he shouted back, "WHERE'S YOUR CAR?!"

I guess he could easily spot my blue mini from the water at times, and that's how he knew I was successfully spectating if he couldn't hear me shout. At Raccoon Mountain, he just saw me running around like a crazed chicken. At least I made him laugh!
At this point, he was on his own, but still seemed to be going at a good pace. Filled with relief, and knowing the next stop was easy to find and not far away, I was able to take a breather and head down to mile 24, Sullivan's landing.

Sullivan's Landing, another boat ramp well across the gorge from where the paddlers pass, is the furthest viewing point I stopped at. Still, I was able to spot Matt without binoculars (I will try to get some next year I think!) and shout across to him. (He told me later he was able to hear me and see my car.)
On my way to the finish line, my GPS got all turned around again, but I made it to Hales Bar shortly after Quack. We were able to see Matt's friend Justin finish (he was on a surfski, the fastest of the paddle crafts), and his friend Murray. Finally, we saw Matt come around the corner. 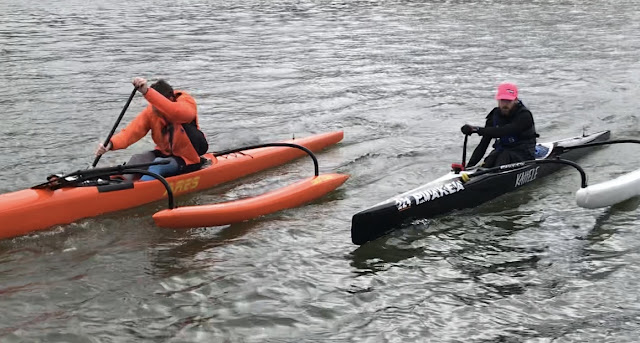 As I've mentioned in past Chattajack posts, the race ends with a separately-tracked final sprint. Racers can place in the race and in the sprint. Matt came to the final buoy turn with another OC1 just ahead and a SUP racer between them. The other OC1 kept attempting to block Matt from getting around him, even trying to knock him into the floating dock.
Luckily, they had to split around the SUP'er, which gave Matt some freedom from the overzealous (and over-competitive) OC1. As usual, I ran beside him down the dock, shouting and encouraging him. (It sounds like I'm coaching him to give birth...the video below is not for the easily motion-sickened because it was filmed by accident and is ALL OVER the place.)
Matt was able to pull ahead of the other OC1 at the finish. His time was 5:20:xx.
He was in better shape than in some of the past years - no major blisters, no hypothermia - but his arms were cramping pretty badly. Not only had the flow dropped, but the wind had risen, and once again he battled headwinds and whitecaps for most of the race. 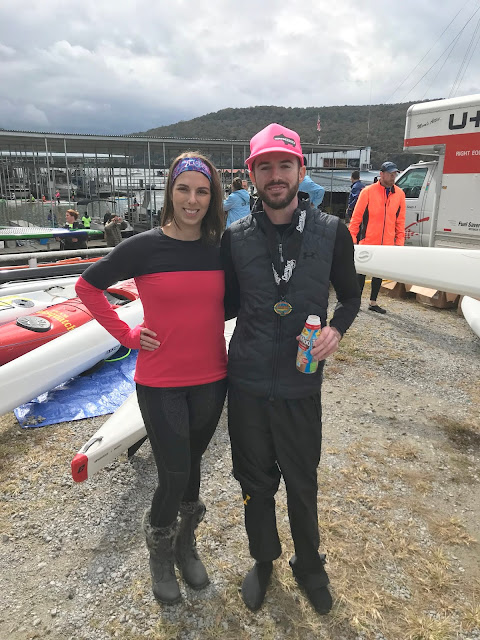 After getting him back to Quack's, cleaned up, fed, and rested, we headed back out for the awards ceremony. Matt didn't place this year, but he wanted to get his commemorative glass and trade survival stories with his various paddling friends. (I realized this year that Matt knows basically the entire Florida paddling community and is too popular to be married to this anti-social homebody.) 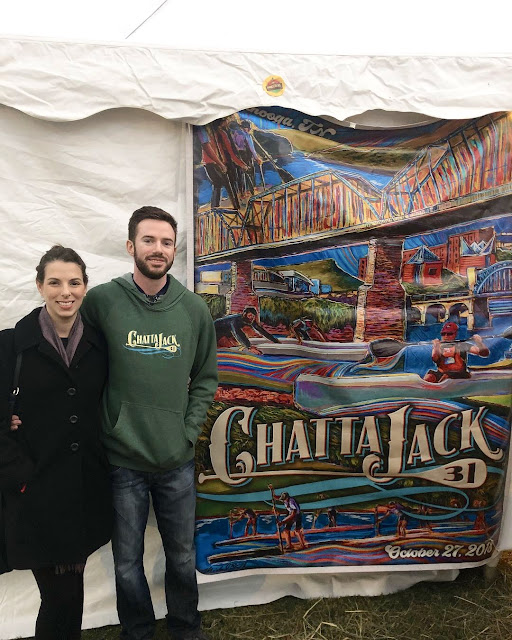 We got ice cream with Justin and his family before calling it a night.

Over all, it was a good race and a good visit to Tennessee. Next year Matt will earn the much-coveted belt buckle given to racers who have completed five consecutive years of Chattajack. After that, he says he'll take a break from this monster challenge...but who knows...there's a 10-year belt buckle out there, too.