Hoo boy. December was as tough as I thought it would be with our travel plans. But it also had some shining moments, including my first 10-miler of training well ahead of schedule.

I started the month with the tail-end of a cold, so I missed some runs early in the month, but then I was able to stay on track and get in some solid training for most of the month. 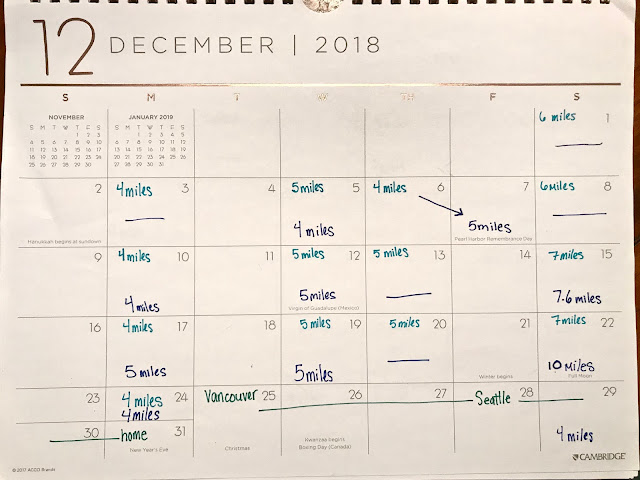 While we were in Vancouver and Seattle, we did a ton of walking, but I only managed to get in one run. It wasn't really a quality run; the first 3.5 miles felt pretty good, but I never settled into a groove because the terrain was so outside my norm - hilly.

The last little part of the run was a mess. We tried to run half of it to a Safeway to pick up bus cards, but the hills outside the park were so steep I had to give up. We did run from Safeway home, but it was so steeply downhill that I was worried I'd hurt myself, so it was barely a run.

I'm still not thinking about paces or goals for A1A at all. I'm just enjoying training and letting my body lead the way.

I am pretty happy with how December went, and from this point on, training should be smooth sailing! No more interruptions ahead!

Since vacation, my legs are having a tough time recovering. I'm hoping they warm up soon, as January is already well underway.

Now, I wrote before that I'm scrapping all my Thursday runs because it helps my legs feel more prepared for Saturday long runs. My original planned distance for December was 71 miles. After crossing out Thursdays, here's how my December looked.

Here's to January! Race day is 5 weeks away.