You would think that after ten years, I'd be over a little solo-run anxiety, but apparently not. Despite my runs being fairly short right now - three to four miles most days - it sometimes takes me fifteen minutes or more of mental prep to get out and start moving. Not because I'm not motivated, but because I'm anxious.
In fact, I've missed quite a few runs over the last few weeks because of this. Some nights, my anxiety is so bad it upsets my stomach, which gives me a legitimate reason (or excuse) to skip a run.

At first I thought maybe I was bored of my routes. I've been running the golf course pretty frequently and have been avoiding my usual bunny-infested neighborhood because of burnout, but now it seems the thing stopping me from going back there is some amorphous fear, not boredom.

I'm not sure if I'm just nervous about starting a real training plan now that I have a fall race lineup or if it's something else. I'm trying to psychoanalyze myself and coming up short.

Here's how it tends to go. The first few minutes of any run, I'm usually on fairly public roads or, if I'm running the golf course, on a section that is slightly visible from the road. If I've driven to a starting point, I'll feel anxious and sick the entire drive; I'll park and sit in my car, frozen and reluctant to walk away from it and start my run, for a long time...checking email and apps to buy time.

Once I do start, within a couple minutes I'll turn into a gated neighborhood or have gotten out onto the main fairway of the golf course and I feel more at ease. I feel...less visible, and therefore better. Safer.
This is a completely irrational anxiety, like most of my anxiety is, and it's a pretty new manifestation. I'm not anxious about the run not going well or my ability to complete it or anything like that. I'm not worried about my legs cramping up. I can't really pinpoint the cause or the trigger. I'm just...anxious.

Once I get going I feel fine, or even really good, for the entirety of the run. So logically I know that if I can just get myself over the first hurdle I'll be fine. But it's so. dang. hard.

I'm not even sure what the solution is here besides to just keep forcing myself to power through the anxiety to get to the good stuff. But it would be nice if I could get to the root of this new issue and nip it in the bud so I can get on with my training, because the bottom line is that I'm looking forward to my races and anxiety is really messing with my plans!

Email ThisBlogThis!Share to TwitterShare to FacebookShare to Pinterest
Labels: anxiety

A 5k and Two Relays on the Horizon

I honestly wondered if I would have any kind of race season or calendar for the latter half of this year. Besides my goal half and a sprinkling of summer 5ks, I haven't felt much any motivation to get up early to race or put in miles for training purposes. But the school year has finally started to feel manageable and I've been able to think beyond my next opportunity to nap...and that means my mind is on racing.

This fall is going to look pretty atypical from my usual fall race seasons, though, with both my big races being relays rather than standard fare.

An old colleague of mine reached out to me a few weeks ago. He is helping to plan a 5k and wanted me to sign up/spread the word. I knew it would be a good race based on timing. It's in mid-October, so I'll have time to train and it'll be a good training race for my other fall plans. It'll whet my appetite, if you will.
After my last couple less-than-stellar 5ks, I'm a bit nervous for this one, but it'll give me some focus and a baseline to help get back into racing shape.

Months ago, Kristina piqued my interest in the Fort Lauderdale 13.1 relay. This year I won't be running A1A because they've moved the date from February to January and it's just not realistic due to travel. But, the Fort Lauderdale 13.1 is on a long weekend; I don't feel much like running a half in November, but the relay option sounded fun, and Matt agreed!
We have been having a time of getting signed up, though. The website won't let you add a relay team name or add a runner without tacking on a double entry fee. I've gone back and forth with the website support rep but the problem is on the organizer's end. Basically, we will probably plan to sign up at packet pickup the day before the race and hope that works out.

Hey, if everyone is having this issue and can't sign up for the relay, then Matt and I are sure to place because there will only be two teams running - Kristina's and ours!

Last year I turned down Michelle when she asked if I'd be interested in running the Ragnar Florida Trail relay. I just felt like it didn't fit my plans for A1A and my legs were still kind of in "recovery"; the idea of running 15.5 miles on a trail with tons of elevation was scary.

They deferred to this year, and this time when she invited me, I agreed! I still think the race sounds scary, but I feel more confident about my running than I did this time last year and I think I'm ready to tackle some bridge running after a long hiatus.
The race is in early December and Matt is also going to run it. The last time I ran a Ragnar I had a blast, so I'm looking forward to another fantastic growing experience. This race will be the capstone of my 2019 running season and will take the most training and planning; I'm champing at the bit to get started!

So, it looks like that ties up the remainder of 2019, if all these races pan out. I had hoped this year would be about making a comeback, and I think I've been fairly successful. I'm still incredibly happy with my performance at A1A.

Still, the basics of training will be the same. In the next few days I'll be sketching out a calendar and getting down to the work of building mileage and increasing consistency. I can't wait to get started.

My latest goal on my journey to cut animal products way down in my diet was to find a suitable egg substitute. From what I've seen, finding anything that will accurately mimic a nice, fried, over-easy egg is going to be impossible, but there are a few products out there to mimic scrambled eggs and sub in during baking.

(Quick tangent: we tried Just Egg for scrambled, and while I find it's got the same kind of flavor profile as eggs - kind of umami - it definitely doesn't taste like an egg. It pairs well with toast or pancakes and I actually really like it, but it's not egg-tasting. It's just...egg-like. The texture is really good, too! For the price though, I'm not sure it's worth it.) 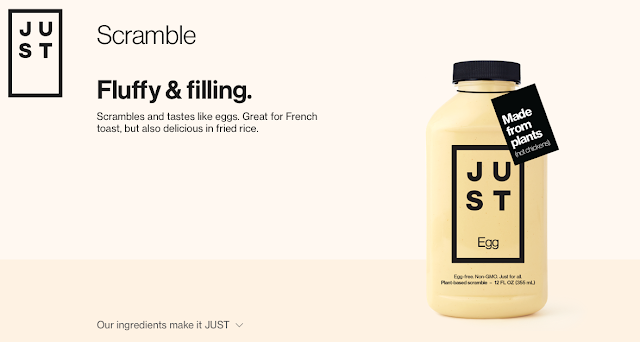 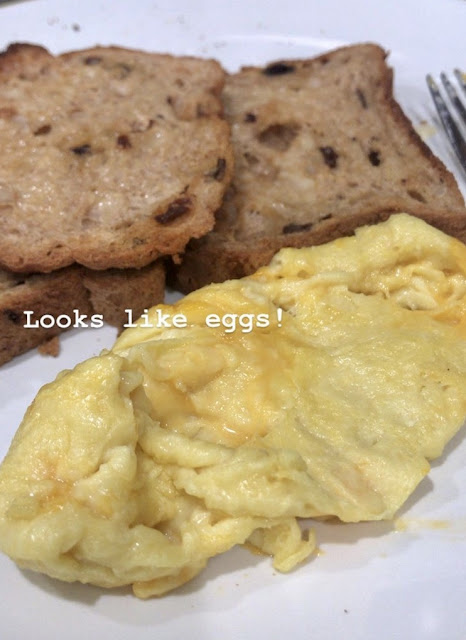 While the internet tells me I can replace an egg in baking with applesauce or a banana, I wanted to try a real egg replacer because I've also read that the applesauce or banana route can change the flavor and texture of whatever you're making.

So, I picked up some VeganEgg. I like Follow Your Heart cheeses (although Violife has recently taken the top-spot in the cheese replacement category for me) and VeganEgg is made by FYH. And really, I saw it on the shelf and was like "Oh I recognize that kind of, so it must have a solid reputation, so let's try it!" 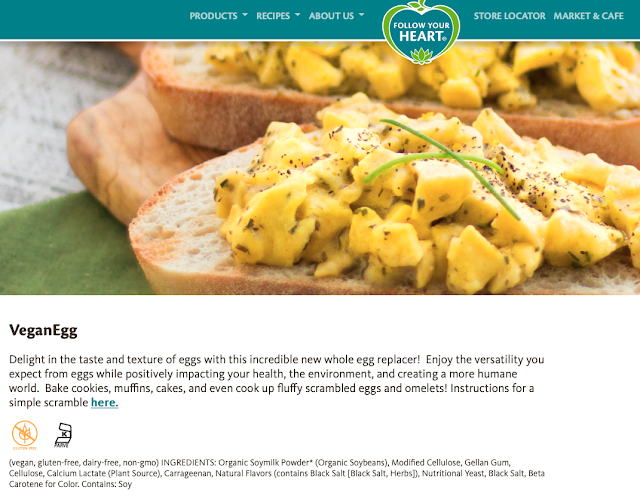 My first impression was that the instructions were pretty unclear. Generally, 2 TBSP VeganEgg + 1/2 cup water = 1 egg, but when baking, the formula is "1/4 cup water to 1 VeganEgg"...so I spent some time trying to figure out if that still meant 2 TBSP or what. 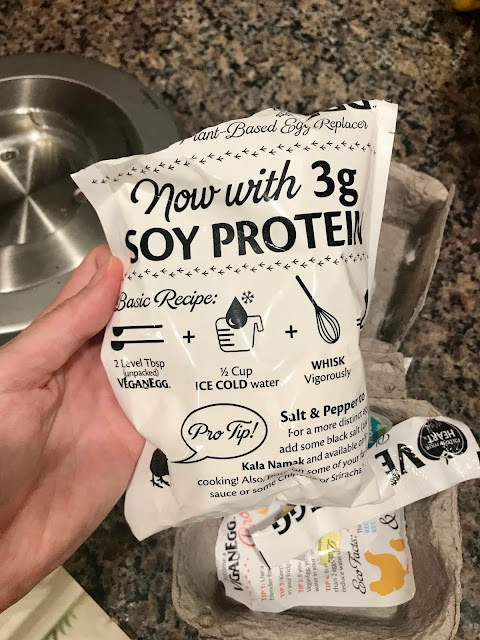 In the end, I just had to make a guess. The website basically says you should cut down on water per egg when baking so I assumed I was supposed to decrease the amount of water and keep the powder the same.

Second impressions: this stuff smells kind of weird and sulfury. Which I guess it should because it's mimicking eggs? The scent is not overpowering or very off-putting, but it's definitely there.
Third impressions: Once I mixed it up and put in the rest of my ingredients, the batter really looked just as it should so I guess I got the ratio right! 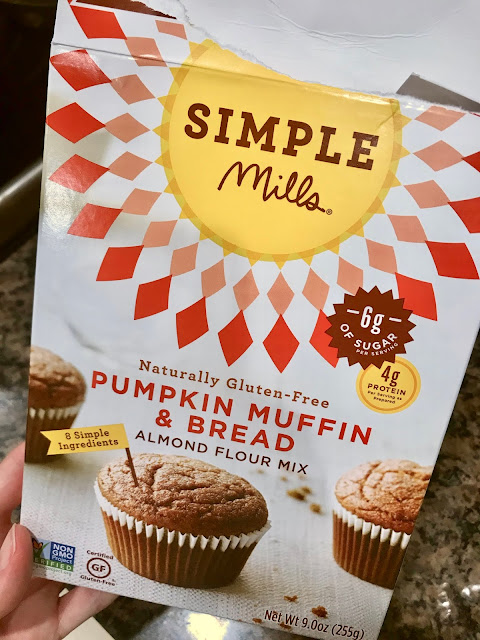 This mix calls for 25-30 minutes at 350F, and my muffins were definitely done at 25. I'd say my oven does tend to bake a little hot, so I don't think the VeganEgg had anything to do with that.

I noticed my finished muffins seemed pretty squat, but Simple Mills generally doesn't rise very much, so this may not be due to the eggs. Or it might be. Who knows!
They were definitely baked through (no crumbs on my tester), dense inside, and super moist. I probably should have tested the VeganEgg with a recipe I know really well so that I could easily spot any differences, but I will say that the muffins tasted great so I have no complaints.

As far as I can tell, VeganEgg is a perfectly fine egg substitute for baking. I definitely plan to continue using it in this capacity. I'm relieved to have found something that works!

Now if only I could find a good replacement for hardboiled and over-easy!