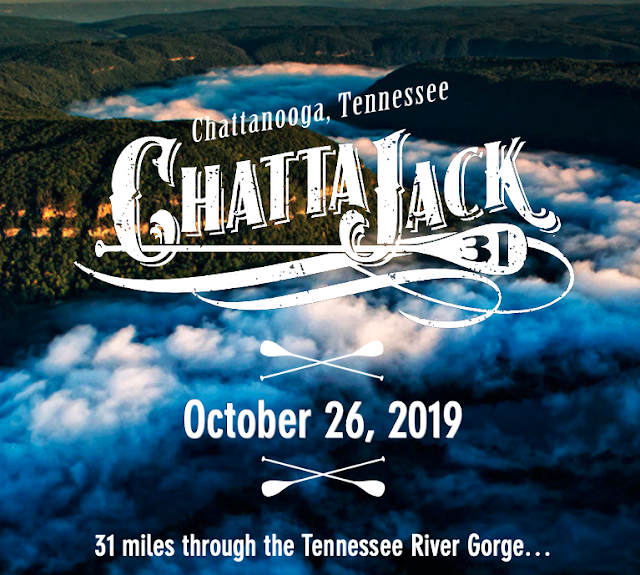 Over the years, he's faced a variety of challenges in completing the course, but he's always prevailed, despite freezing cold, high winds, and driving rain. He's raced on stand-up boards of various lengths, his OC1, and now an OC6. 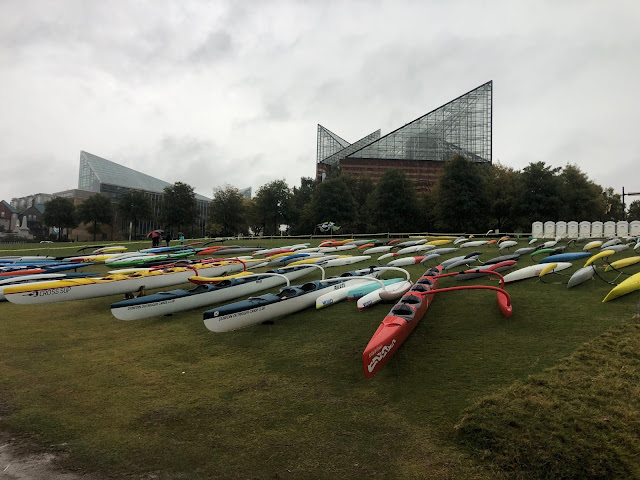 For those that are new here, Chattajack is a 31+ mile race on the Tennessee River. After I ran my first marathon, Matt was intrigued and wanted to find a similar challenge for SUP. Boy, did he!
Saturday the 26th dawned wet and warm. We'd arrived in Tennessee the previous Thursday and had endured a couple days of constant rain. Everyone hoped the rain would let up on Saturday; it didn't quite stop, but it was lighter.
This year, Matt raced in an OC6 (an outrigger canoe with six paddlers). His team (Ka Nalu Nui, called K2N) consisted of his paddling friends Robert, Cindy, Jim, Bill, and Dalton. Each seat in an OC6 has an assigned task. Matt's job, in seat 1, was to set the pace.
The OC's start later than the SUP paddlers because they are faster crafts, so they start a little later, at 9am instead of 8:30. This meant I had time to get a little run in before seeing them off at the start line.

There was a bit of a collision at the start - K2N's ama (the smaller piece that helps balance the boat) got caught on a smaller OC2's back end. There were heated words exchanged. I'm going to skim over how this ended up causing some drama later, because I actually think it warrants its own post. 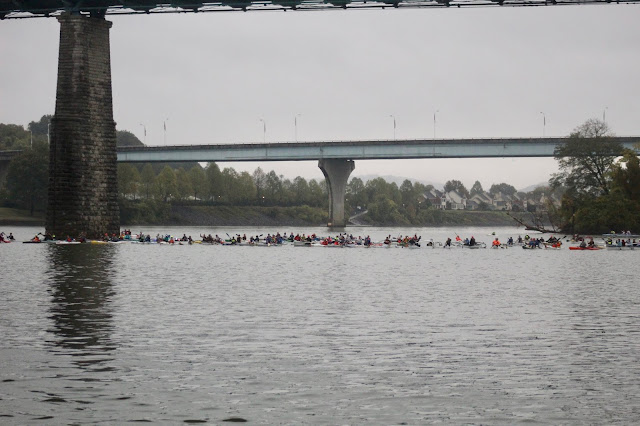 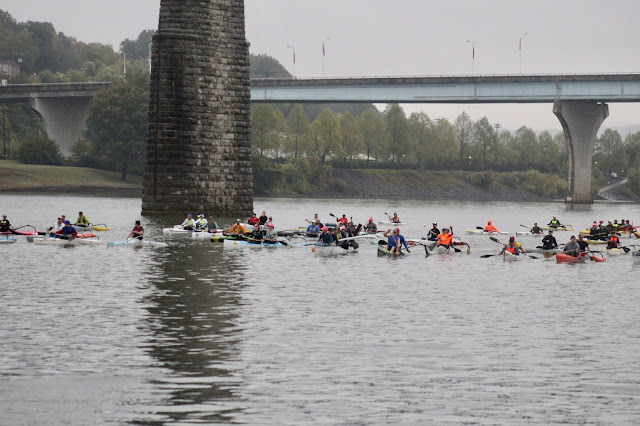 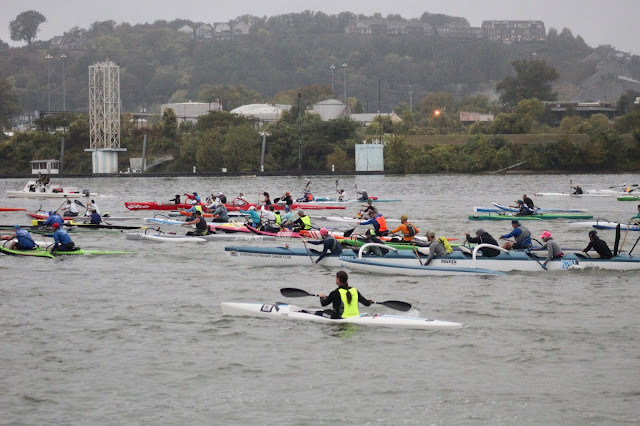 Anyway, after the collision (which are par for the course in paddle racers and of which there were quite a few that morning!) K2N got their momentum and got moving!

I saw them at mile 10, Suck Creek, as planned. (In fact, I made it to all my viewing stops this year without any drama or getting lost, which was really good because they were so much faster than when Matt paddles solo that if I had gotten lost, I probably would have missed them. I barely had to wait for them at all along the course!) 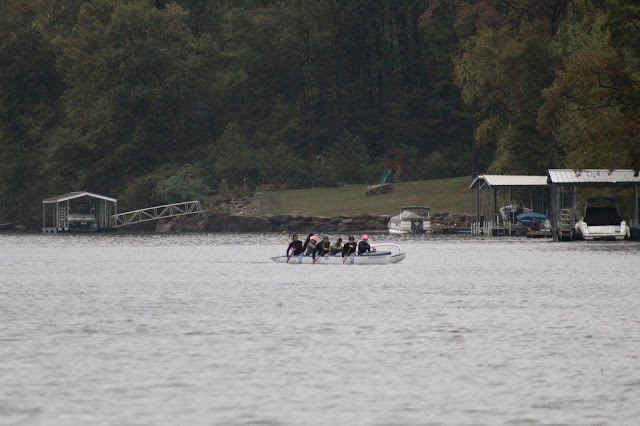 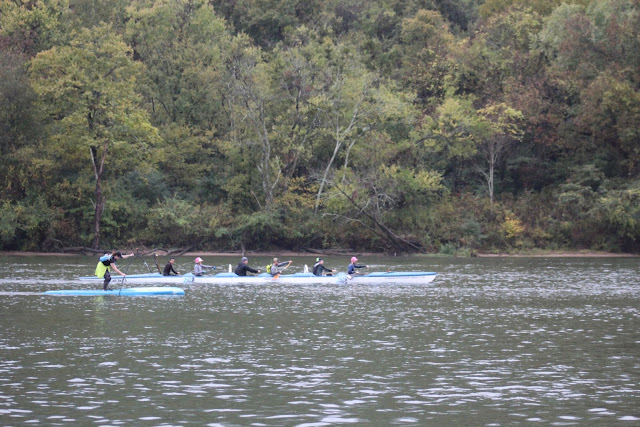 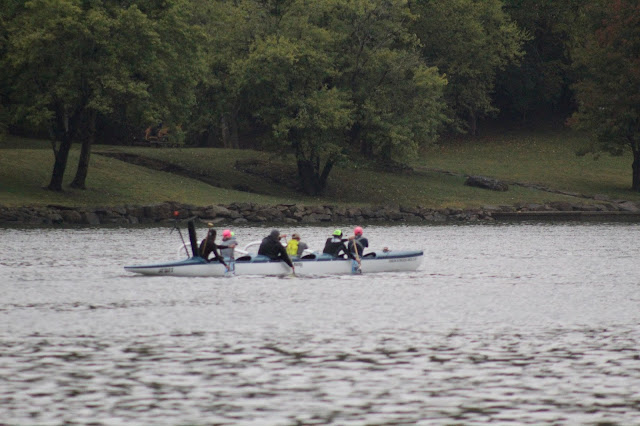 Anyway, they were looking strong and in good spirits, paddling away! The rain had stopped and it was breezy but not too windy - excellent outdoor activity weather. They were the first OC6, and I didn't see another anywhere close behind.

Next, I drove to mile 20, Raccoon Mountain. I always get lost getting to this stop, but not this year! As I waited for them to arrive, I noticed the rain and wind had picked up a bit. I saw them after about 15 minutes. 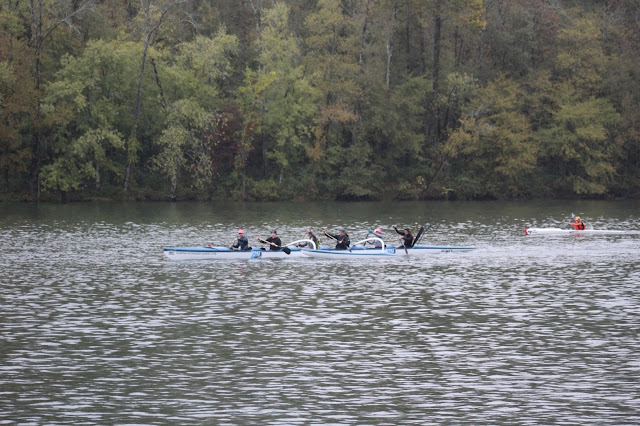 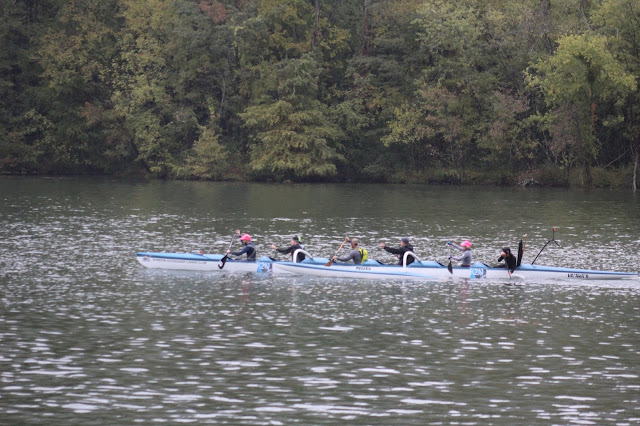 They still looked strong, but a little more subdued. At mile 10 they had still been fresh and peppy; I could tell the race was starting to get tough. Matt told me later that they had started to get some headwinds around mile 15 or so (gusts around 30+ mph), which are always tough to paddle through, but then those headwinds turned into tailwinds and they got to ride some waves and basically enjoy some fun, downwinder-style waters.

I made a pit-stop at Raccoon Mountain's visitor center to use the restroom, then hurried down to mile 24, Sullivan's Landing. This is the spot where the viewing point is farthest from the boats, as they stick to the opposite side of the river. With our new camera, though, I was able to finally get some good views of them. Also, the gigantic boat made spotting them much easier. 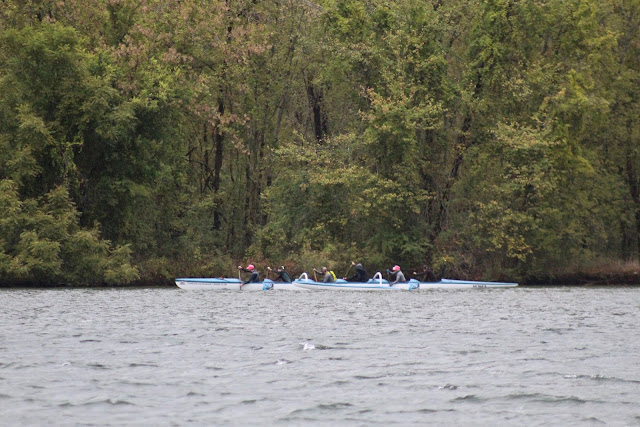 I could tell the wind and picked up, but the temperatures were still mild and the rain was barely spitting. Overall, I'd say it was some of the best weather we've ever had for Chattajack.

From Sullivan's Landing, it was on to the last stop: mile 31, Hale's Bar. I arrived so early they were still setting up the finish line! No one had finished yet! That's never happened before!

I got comfortable on the dock. As usual, Quack joined me. There was a bit of entertainment as the first finishers came in, especially because someone had tied a random fishing boat along the dock where the final sprint takes place, and a volunteer had to hop in the boat and paddle it out of the way so the surf skis could get by unobstructed.
After about twenty minutes of waiting, Matt's team turned the corner and came into view. 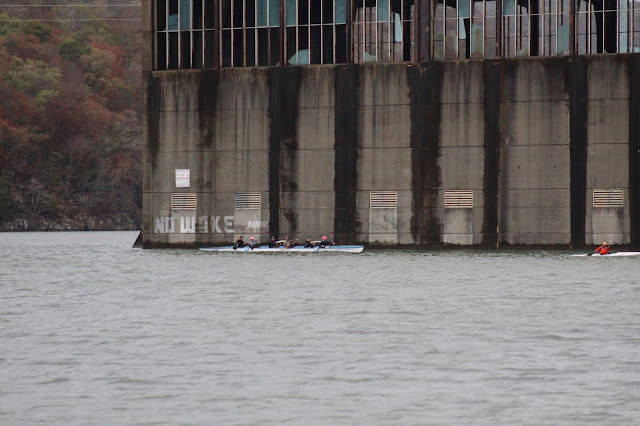 They dug deep and paddled hard for that final 300 yard sprint. I took photos, then, as usual, ran along the dock beside them screaming wildly. 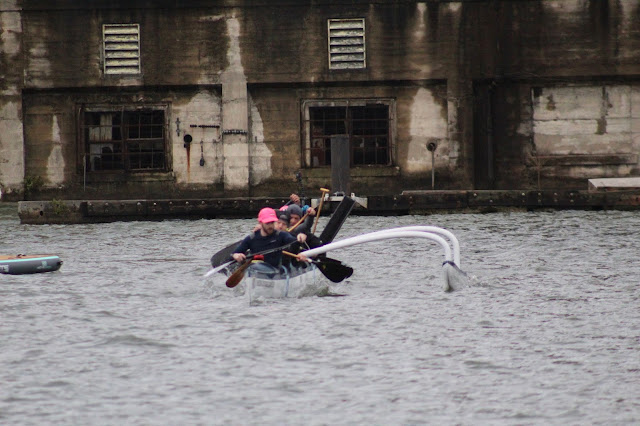 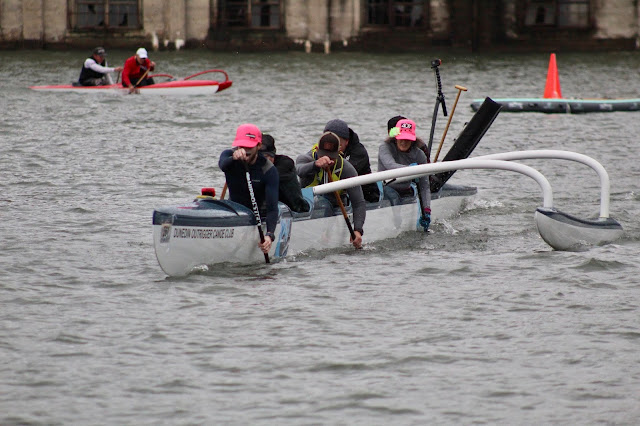 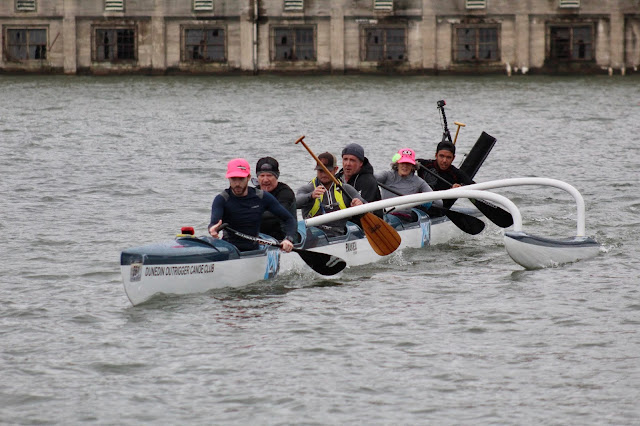 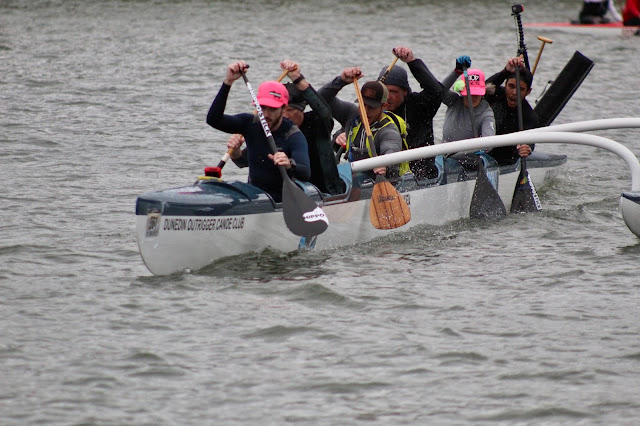 Bill's girlfriend got video of their finish:
Obviously, they were exhausted, but so ecstatic! They'd finished right around their expected time (4 hours 8 minutes) and in first place by over 10 minutes. They also placed first in the sprint (which is timed separately as a second mini-race at the end of the main race). 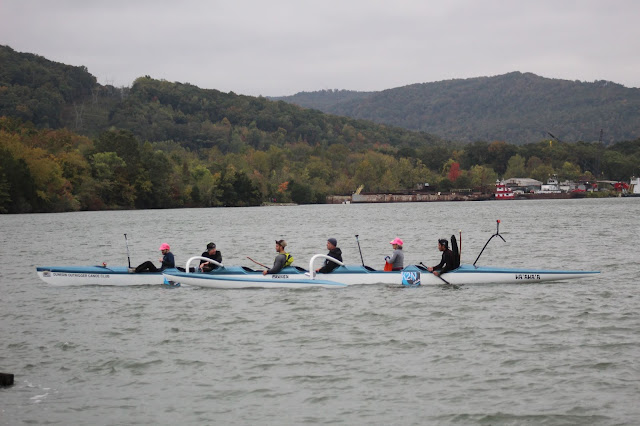 After getting the boat out of the water and situated on the trailer (and dealing with more drama from that collision early in the race), we headed back to the Airbnb to shower and relax. 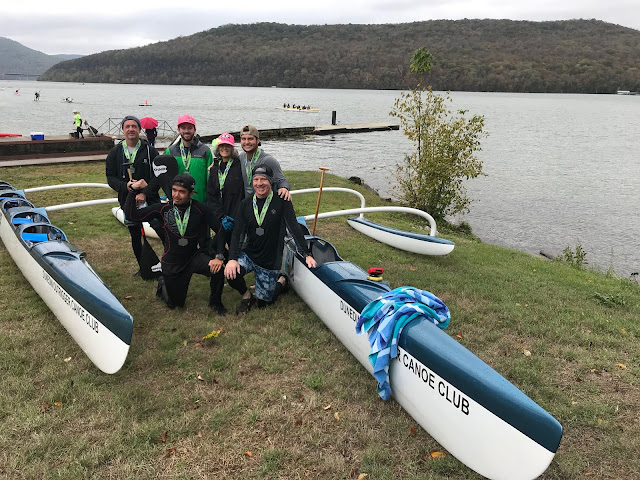 
What a day yesterday. Still taking it all in. ✅ First place OC6. ✅ Fastest sprint finish after 32 miles (separate award). ✅ 5 year belt buckle earned for 5 consecutive successful @chattajack races. After finishing 3rd and 2nd in past years, I feel like I’ve hit for the cycle by adding the above awards this time. The conditions were awesome. 30+ mph winds. Sometimes headwind, but more often downwind. We were catching bumps on the river in a 40 something foot OC6 😍 Our final sprint was apparently a bit sloppy with some missed switches and not always in sync, but in our defense, the crowd on the dock was going wild, we just paddled 32 miles, and we could barely hear the switch calls. It was an amazing feeling and we still had a convincing win in the sprint awards. Big thank yous to all my teammates for killing it while having fun, @abk_runs for being the best one-woman support crew and cheering squad on the course, @_super_robert_ and Ka Nalu Nui for organizing it, my college buddy “Quack” for his yearly post-race help and support, and Brent at Dunedin OCC for lending us a fast @puakeadesigns unlimited OC6 and hauling it up here. More to come later! . . . . . . . . #paddlerace #race #fitness #itsaboutlifestyle #stokeonthewater #chattajack2019 #chattajack #oc6 #outriggercanoe #puakea #puakeadesigns #puakeamalolo #malolooc6 #outriggerzone #crosstraining #canoeracing #canoerace #outrigger #hippostick #hippostickherd #puakeaohana
A post shared by Matt Kearney (@stokeonthewater) on Oct 27, 2019 at 4:17pm PDT

At the awards ceremony that night, Matt got that shiny, special belt buckle. K2N snagged their first place awards (handprinted posters) and first place sprint awards, too (custom hats). Matt also got to see his paddling idol and friend Danny Ching, who raced Chattajack for the first time this year and won first in his division. 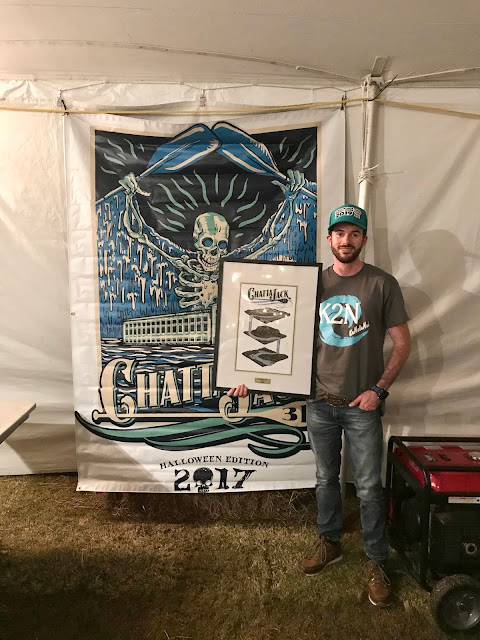 On Sunday before heading home, we stopped at Point Park for some photos and had lunch with Quack. 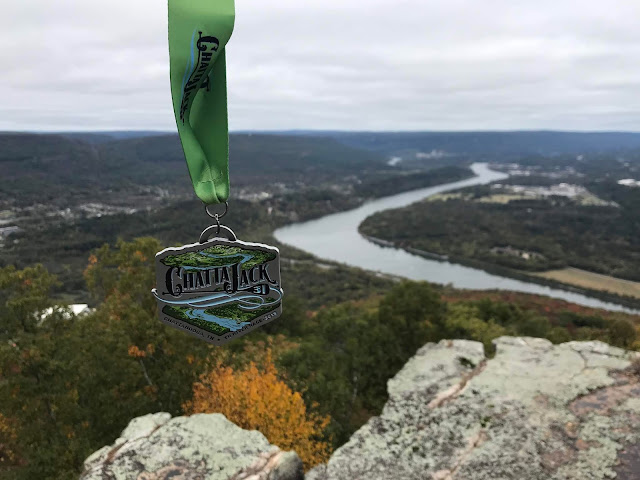 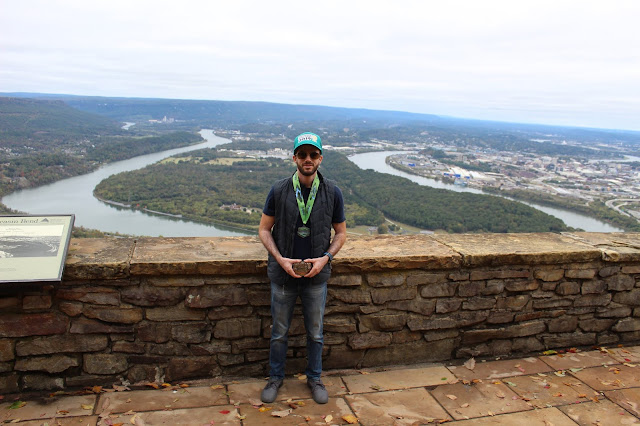 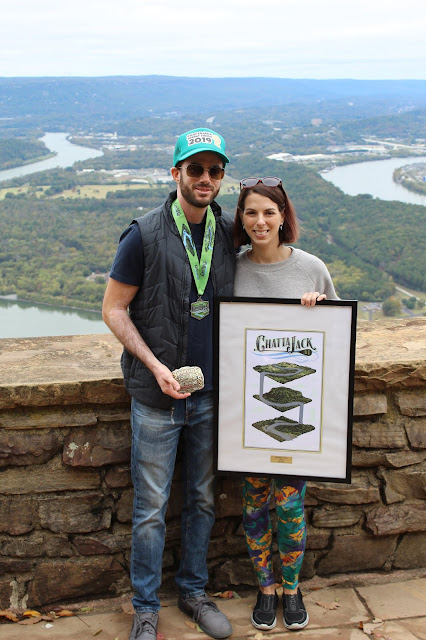 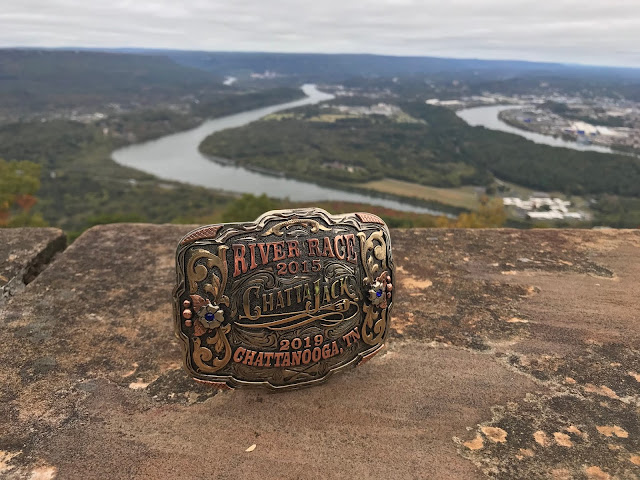 
#Chattaswag At first, this race started as a bucket list race for me. But it was so awesome I had to do it again the next year. But I still figured I would just do it now and then since it is a big far away race and tough to do every year. But a few years ago, during the award ceremony for probably my second @chattajack in 2016, they gave out these super nice custom belt buckle awards to a small group who had done the race successfully in 5 consecutive years. I knew right then that I was going to have to do the same thing 😅 . I knew it would be no small feat. Racers I knew had to start their 3-4 chattajack streaks over due to having to drop out mid race from hypothermia, missing cutoff times at the end by mere minutes, life getting in the way, injuries, etc. 5 consecutive *successful* finishes is tough. This year, my final year of the streak, I decided to do OC6 to do yet another craft at the race. But I knew and stressed out all along about relying on so many other people to complete my streak. You see, even if one person dropped out mid-race, and the rest of us finished without them, we would all be disqualified. If someone got sick or injured on the way to Chattanooga, we would be in a tough spot. And I even brought my SUP up as a backup in case the OC6s were delayed or damaged in an accident on the way up. I made sure my teammates brought extra warm clothes to store in the canoe so hypothermia couldn’t derail us. In the end of course, my teammates were all badasses and I didn’t have to worry about them, just myself. And it was amazing to experience the thrill and accomplishment of Chattajack as a team for once. And to have a bunch of friends in the same boat helping me accomplish this streak was special too . There’s a strong chance I take a break from this race next year. After all, no 10-year belt buckle has been announced yet 🤣 And @abk_runs says its her turn for a big far away race which is definitely true. She’s been an amazing supporter these last 5 years. Thank you to @kimfriberg83 and @ben.friberg for organizing this life changing event 🙌
A post shared by Matt Kearney (@stokeonthewater) on Oct 28, 2019 at 2:13pm PDT

This was a great year to cap Matt's five-year streak. Good weather. A strong team. Solid logistics. We couldn't have asked for better! 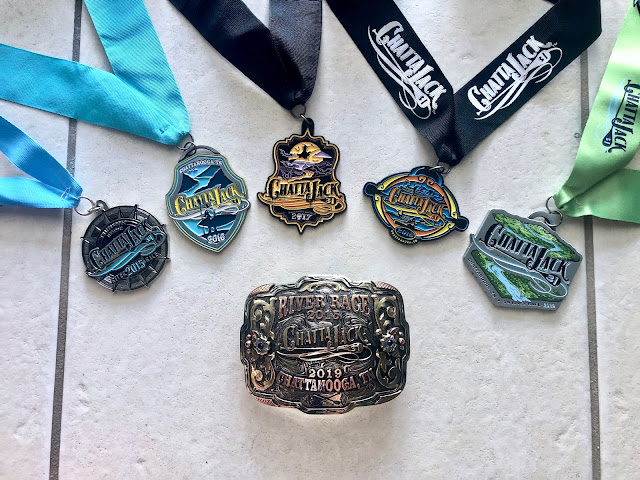