After my surprising performance at last weekend's 5k, I decided to do something I haven't done in ages when it comes to a race: I set a time goal. Specifically, I set a pace goal. I had managed to run the abbreviated Phillippi Shores 5k with an average 9:06 pace, and after a successful and steady 4-mile bridge run on Wednesday the following week, I decided to try for a 9:00 pace this last Saturday.

The Game Day 5k is a smallish race near my parents' house once again staged by the Manasota Track Club. (I hoped this course would be measured correctly.) With Matt in Dunedin for another team paddle, it was the perfect race to fill the spot left empty when the Thrive 5k was canceled.

I knew there would be other Skirt ambassadors there and I was also taking over the Skirt instagram page that day, so everything was falling into place. 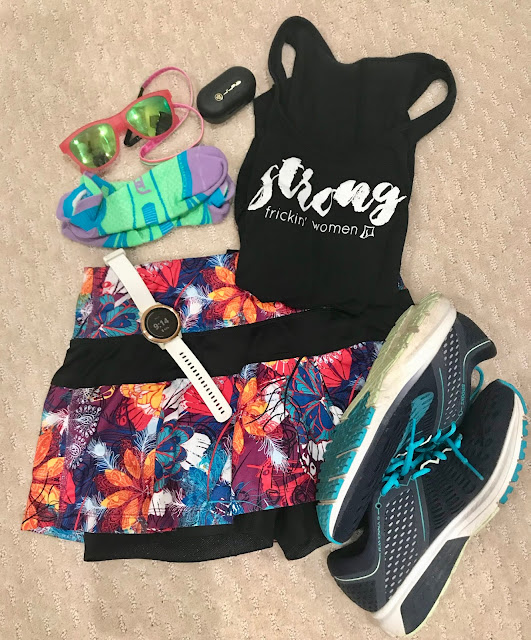 The race was set to begin at 8am, which is pretty late for a 5k in Florida no matter the time of year, but I was surprised by how cool the weather was when I first got there around 7:30. I checked my app to confirm because I couldn't believe it - it was only 68! Fall is really here!

I had to park about .1-miles from the race; as I was pulling onto the road, I noticed a bunch of runners doing their warmups had paused and were indicating I ought to turn around and park on the side of the road rather than continuing to the venue. Listening to them saved me ten minutes of navigating the overfull parking lot and having to find a farther spot, which would have messed up my morning timing. I was grateful!
I parked and walked to the start, where I got my packet and said hello to Wendy and Marjorie. Then I had time to go back to the car, drop my things, put on my bib, and get ready to go. I felt nervous but not anxious.

Once again, there was no tracking mat at the start. I was a little discombobulated because one of my earbuds wasn't turning on, so I was distracted trying to fix that. (Afterward I had to look up how to turn the individual earbuds on and off once they're out of the case, so I'll know for next time!) So, my start wasn't great. I wasn't at the very front of the line and my GPS didn't kick in right away; generally I just felt a little stressed and unprepared when the starting gun went.

This mindset at the start meant I went out a little faster than I should have, but because I had a plan in mind, I reined it in pretty quickly. The majority of the course was shady because of the time of day, but there were patches where the sun was cutting through and already hot. The morning was sticky. This 5k also has a 10k option and I was so glad I wasn't running longer. 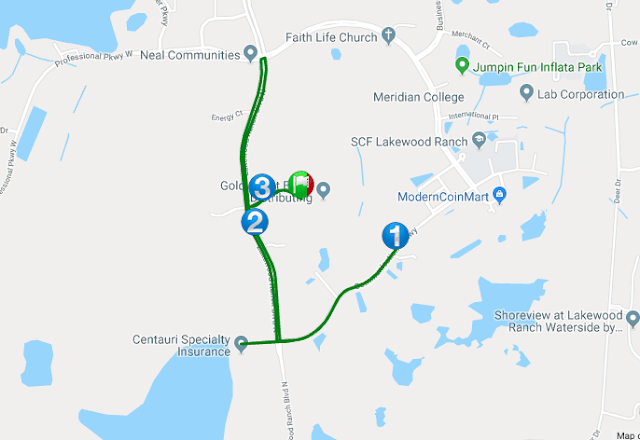 As usual, the last half mile of the race was tough for me. It was starting to get hot and I could feel myself slowing down. I have a tendency to take a walk break around 2.6 miles of a 5k; when I felt I may be losing my pace goal at this point, I just told myself to keep running, even if I had to slow down. Just avoid walking. Just finish in a way that you can be proud of.

Here are two blurry screenshots from the finish line video: 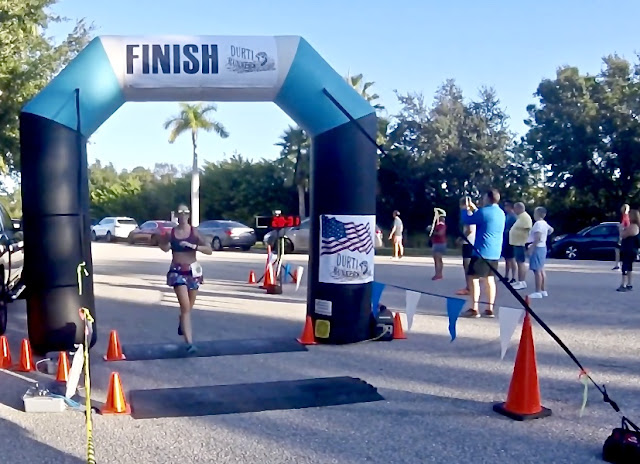 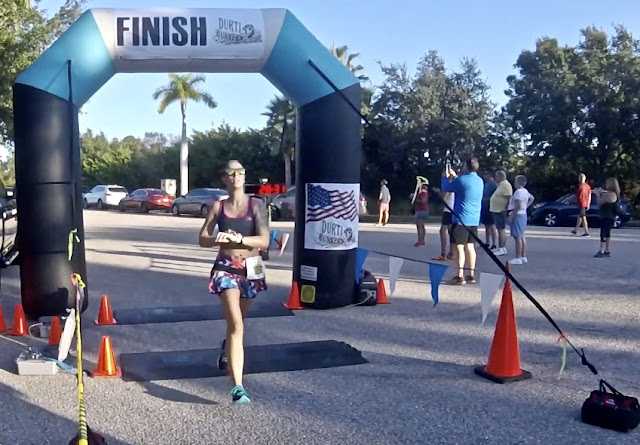 The time on the clock when I finished was 28:30, but my watch read 28:19. With no timing at the starting line, I'm happy to believe my watch over the clock in this case.

I sat for awhile just past the finish line on an open stretch of curb. Eventually I saw Wendy and we got to chatting while we waited for some other friends to finish. 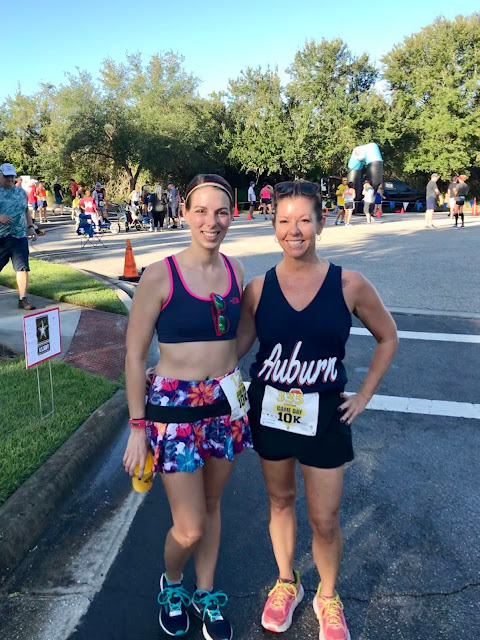 We made our way over to the food and celebration area, where I checked my time. I had placed 2nd in my age group! I had hoped I would place top 3, since this is a small race and the faster runners were taking on the 10k rather than the 5k.
I went back to the car to put a shirt back on, ditch my earbuds, and grab my water. By the time I was making my way back, I could hear the announcer already calling names for awards!
It turns out the ladies in Skirt really cleaned up that morning! We all placed in our age groups, so we waited for all the awards to be read before getting a final picture together and going our separate ways.
Despite missing my pace goal by just a smidge and letting the wheels come off in the third mile, I am really pretty happy with this race. I signed up hoping I'd place and I did. I set a lofty goal and nearly met it. I feel like this race and last weekend's have helped realign my perspective on where I am in my training and fitness right now, which was seriously necessary.

I'm sure I'll post more on it later, but I can see now how much my slower 5ks from the summer messed with my head and my perception of my abilities.

Anyway, this was a fun race with an excellent pay-off, and I hope to run again next year!