The last time I ran an A1A race, I wrote about how I had created some false memories of all the previous times I had run it. I discovered this year that I did the same for this turkey trot! Matt, Steph, and I have run the ALSO Youth Turkey Trot three times, and this year made the 4th, but those year weren't consecutive. Here I was thinking this was a Thanksgiving tradition, but actually the years we ran were 2012, 2013, and 2018.
It's weird how memories work, isn't it?

Anyway, this was the 10th annual, so this year there were medals! Steph opted out this year because, although this race is stroller-friendly, she and Gordon are operating on very little sleep thanks to little Mr. Wyatt. I don't really blame her! They actually didn't make it into town until after our race.
Matt and I went to packet pickup the day before at a local Fleet Feet. Some things on sale caught Matt's eye and he ending up buying his first ever pair of running shorts. He always runs in regular gym shorts. Now he's a convert; after running in his new shorts he's already looking to buy more! 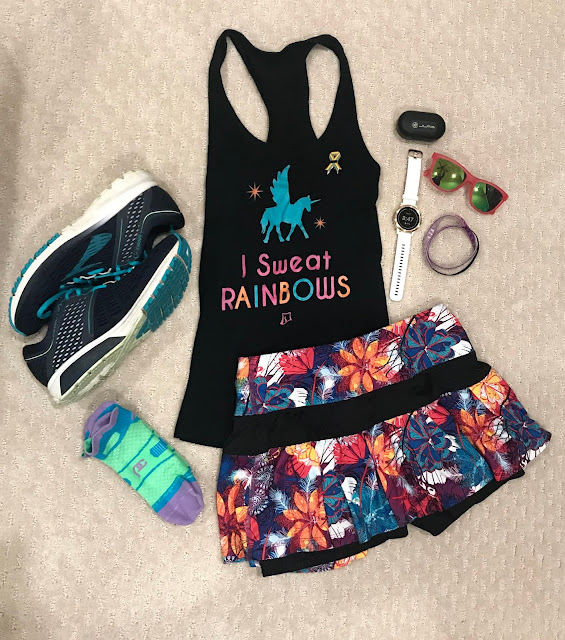 The race start was at 8am. There's been construction on the road where the race begins for years now, so we left the house at 6:45ish and arrived right around 7:20. We had plenty of time to park and use the bathroom. We also checked our water bottles; the race was attempting to cut down on waste and offered a reusable cup check, which was super neat. 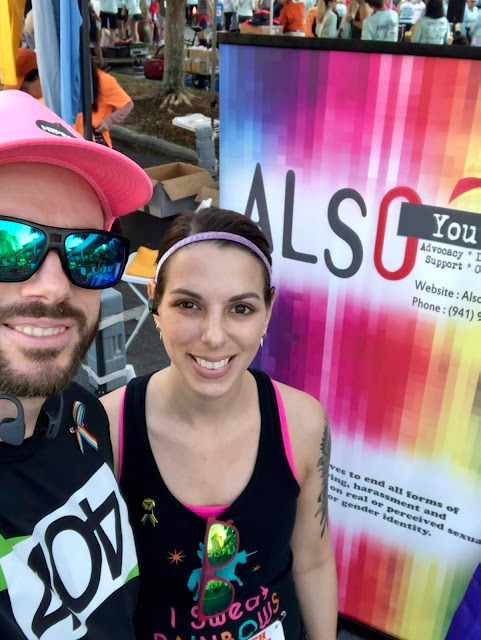 This year, I told Matt we needed to line up at the front of the corral. We always get stuck behind so many children and walkers who don't know race etiquette. I think that made all the difference. 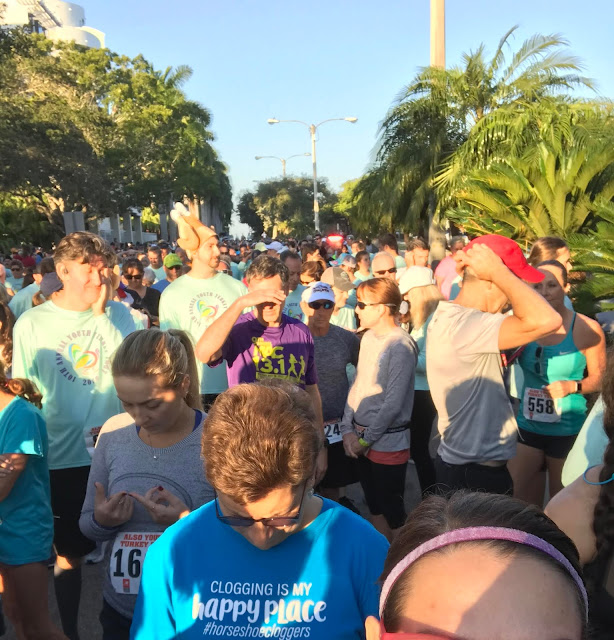 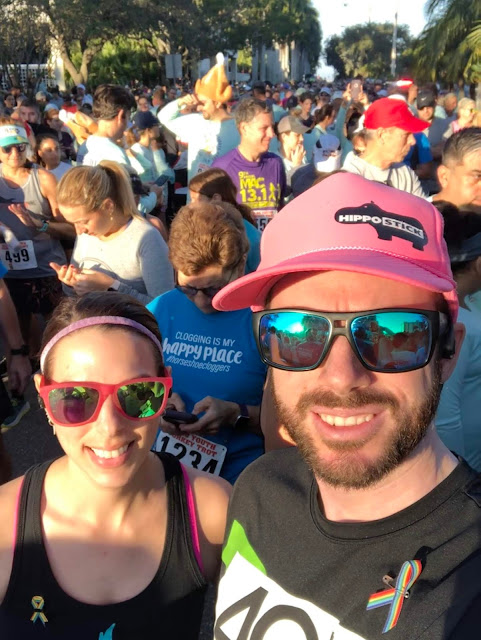 I wasn't sure what to expect performance-wise. I never seem to be at my best for this race and I never set a goal because the bridge is intense. But I saw early on that I was holding a pretty steady pace without having to think much about it.
Within the first mile, on our way up the Ringling Bridge, a woman in front of me slid on some of the grates and took a pretty intense tumble. I stopped to help her up and see if she was okay. (She ended up passing me later on so she was fine!) At that point I thought, "Well, I've been running on my bridge but it barely compares to this one, and now I've already stopped once, so this may be a slower race." 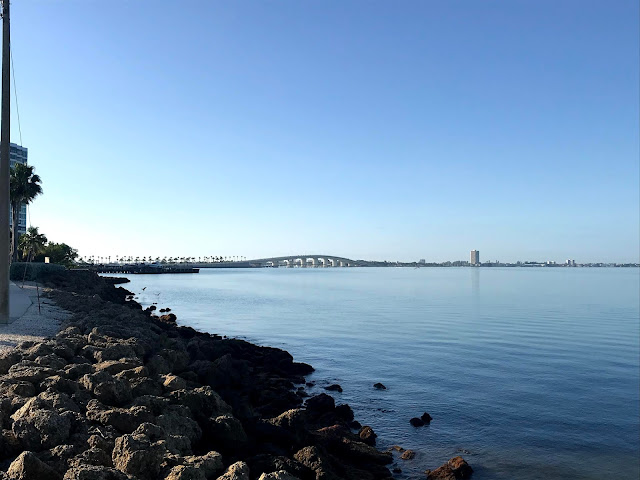 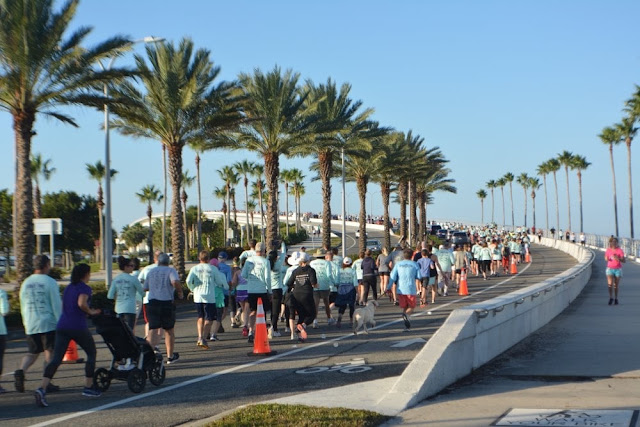 Still, I felt really good on the rest of the first ascent. I waved to Matt as I began the descent and saw him passing on his way back up. This year, they moved the start/finish so the turn around to go back up the bridge had to be moved, too. Rather than getting off the bridge and running on flat land for a bit, we turned right around at the bottom and climbed again!
Not far from the top, I was having a lot of trouble breathing. My heart rate was out of control! I decided to take a quick walk break. 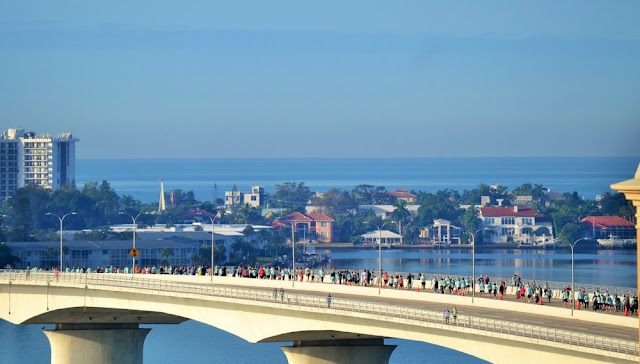 Once I crested the top, though, it was all downhill. I wasn't sure how I'd be able to finish the last half mile or so without walking; I felt completely depleted and exhausted. I was trying to do math and figure out if I was coming in sub-30 or not and was totally failing. My brain refused to work. Somehow, though, I managed to talk myself out of a final walk and keep it in high gear through the end. 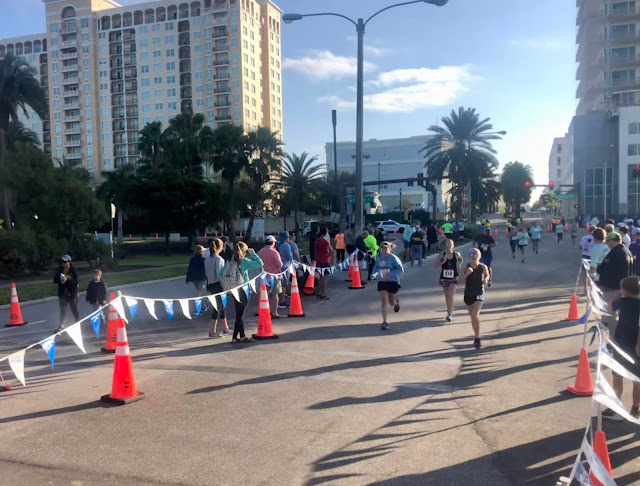 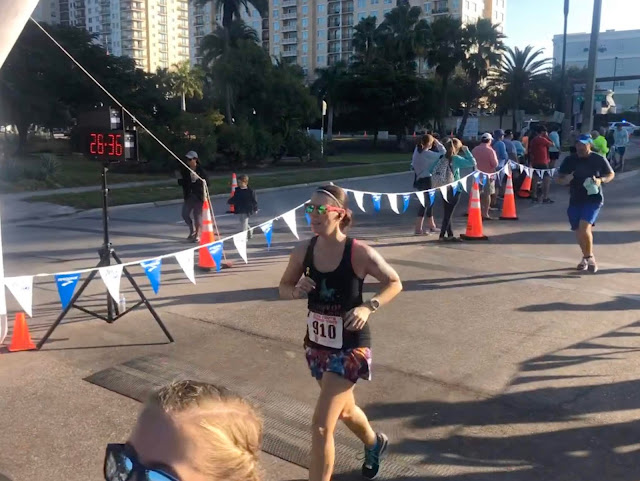 I was so psyched to see the clock! My terrible math had not given me an ounce of hope that I'd be so safely sub-30! This was a huge course PR for me.

Matt and I collected our medals and water, took some photos, and then headed back to my parents' house to officially start Thanksgiving. 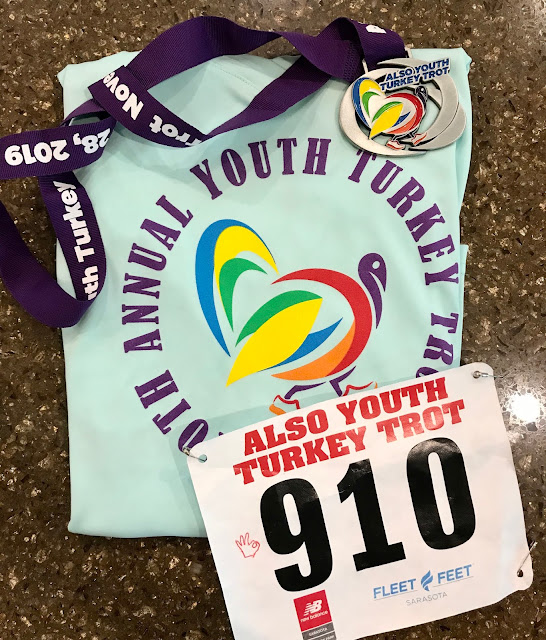 As usual, I enjoyed the challenge of this race and was happy to support ALSO Youth. Hopefully I'll be back again next year!