Sometime after Ragnar, Jessie and I got to talking about running another race together. She already had the Gasparilla 15k on her docket, and it barely took any convincing to get me signed up. The plan was always to meet her in Tampa, stay at her parents' house in St. Pete, and run the race "together". 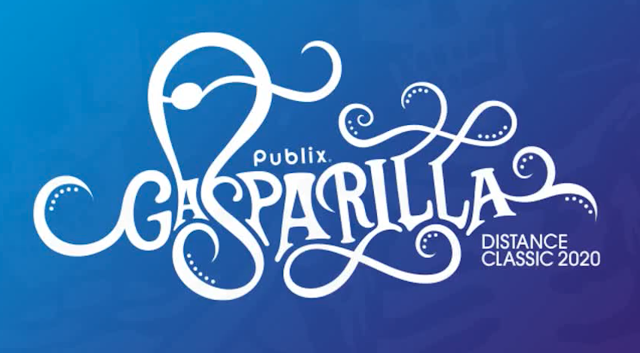 As race day loomed, I was feeling a bit anxious. My training didn't look how I wanted it to but I really didn't want to drop out. In the end, I was able to figure out a fast-and-dirty plan that left me feeling pretty mentally prepared and physically ready for race day.

Leading up to the race, I'd been hoping for one more cold front. Gasparilla is historically a hot and humid weekend, but as I kept my eye on the weather, it looked like I was about to learn a lesson a la "be careful what you wish for." 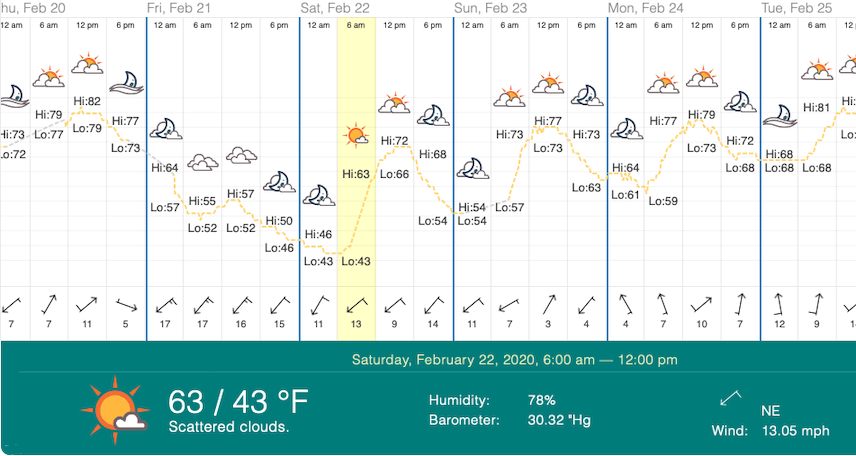 Despite packing Thursday and having everything in the car, I left work early Friday and made a pit-stop at home for more cold-weather clothes. As I've proven over the last few months, I'm really bad at layering. I tend to listen to my body's initial reaction to cold weather and ignore the sage advice to dress in anticipation of warming up on the run. My goal in choosing my outfit was to avoid feeling overheated mid-race.

Friday we met up and went to the expo, which is always completely organized and run like a well-oiled machine. Bibs and packets in hand, we browsed the stalls but didn't find anything noteworthy. 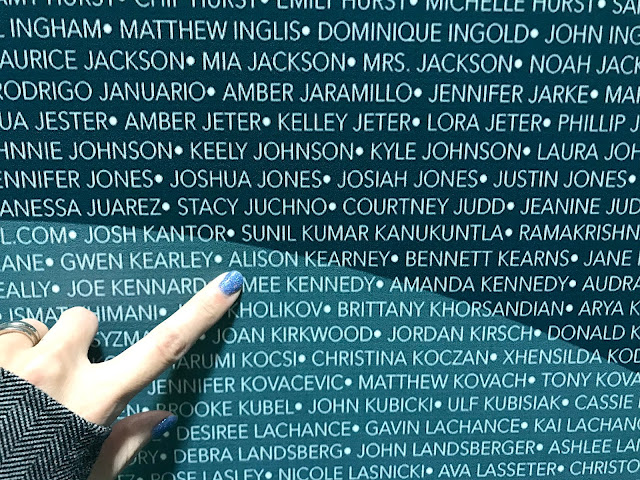 After stopping at the home base to put our bags down and put on some warmer clothes, we met Jessie's husband for dinner at Casita, where I had some tacos that were seriously delicious. I try to avoid spicy food before a race, so I stuck to one of their milder hot sauces, although I had to try all of them.
After dinner, I pretty much went straight to bed. It had been a long week and our day was going to start early. I was up a few times throughout the night, but mostly I slept pretty well.

My alarm went off at 5am on Saturday. I checked the weather: 41º. That was a few degrees colder than expected, but I reminded myself that I would warm up along the way and that the last time I ran in 50º, I was too warm when I layered a vest over my Watch Me Go. 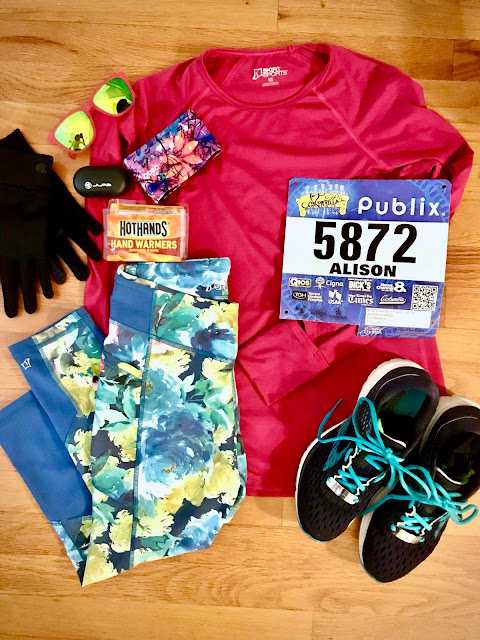 I was glad I'd brought so many options for clothes, but did regret not packing a hat.

Like I had practiced with all my morning long runs, I opted to forgo coffee and breakfast, but I packed a Gu in case I got hungry. (I ran my 8-miler completely fasted but started to feel hungry around mile 6.)

Dressed and ready, we left the house around 5:45. Jessie works in Tampa, so we had the luxury of using her office building as our own personal staging area. We hung out in the car (which we were able to park for free in the building's garage) until we felt time was getting slim, then used the office bathrooms and had plenty of time to walk over to the start. The walk over was the worst part of the morning - it was like walking down a frigid wind tunnel. I was really starting to regret not wearing more layers. 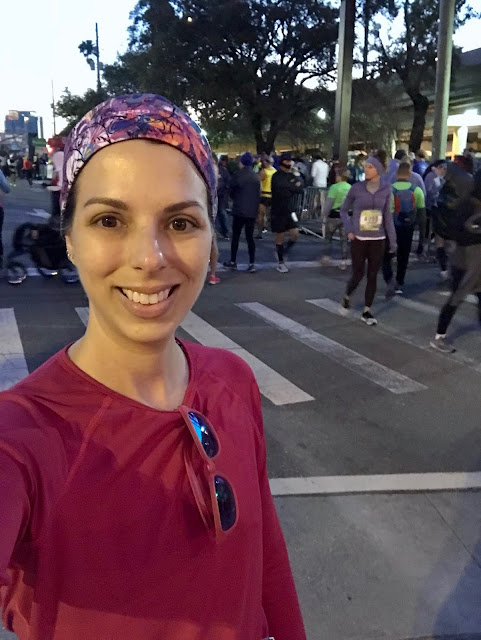 We got to the start with five minutes to spare for Jessie's start time. She was in wave 1. We shared a parting hug and went our separate ways to get into our corrals.

Huddled in the corral, I didn't really feel anything. I didn't have a sense of excitement, anxiety, or any other jittery emotions that usually course through me before a race. I think I was too numb to feel anything!
At 6:50, the race finally began. I tried to tell myself not to go out too fast (I was listening to a podcast rather than music to try to curb that desire), but my body just wanted to get warm. The first two miles flew by; I found a comfortable pace, keeping the10:00 pacer right in front of me, but soon passed them. My hands warmed up a bit and I tossed my Hot Hands.

Around mile 3 I saw someone in Skirt and complimented her taste. I paused to take a photo of the sunrise. Around mile 4 I started to feel hungry and broke out my Gu. It was the Birthday Cake flavor, which reminded me that this was my birthday race. I had kind of forgotten! 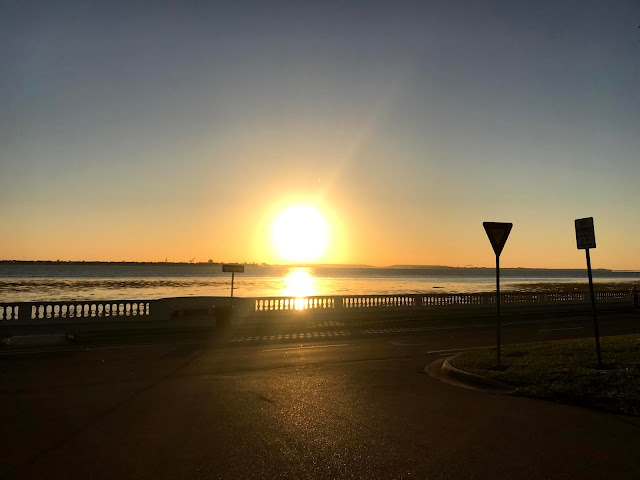 I continued to feel really good. I felt like my pace was just the tiniest bit challenging but I definitely wasn't racing. 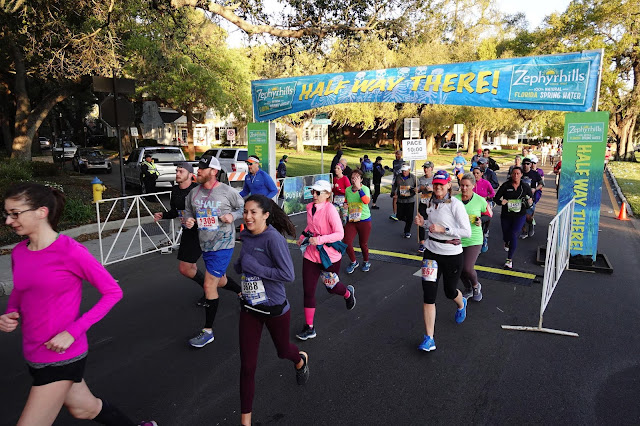 At a certain point, you turn off Bayshore and run down Gandy, turn around, and then come back down Bayshore for the last part of the race. Around that time (mile 5.5 or so), the cold wind that had apparently been at our backs was now head-on. (And I'm not just being a whiny baby about it - the wind was newsworthy for the winners, too!)

I took a walk break to switch from podcast to music and then just kept trucking.

I began to play some mental games with myself, promising myself I could walk at mile 7 if I wanted to, but mile 7 came and went. I paused once more to throw out my Gu, but essentially ran the remainder of the race without another walk break. I'm floored just thinking about that, because those last four miles were tough. The wind added significant resistance to every step and the cold was absolutely battering my lungs. 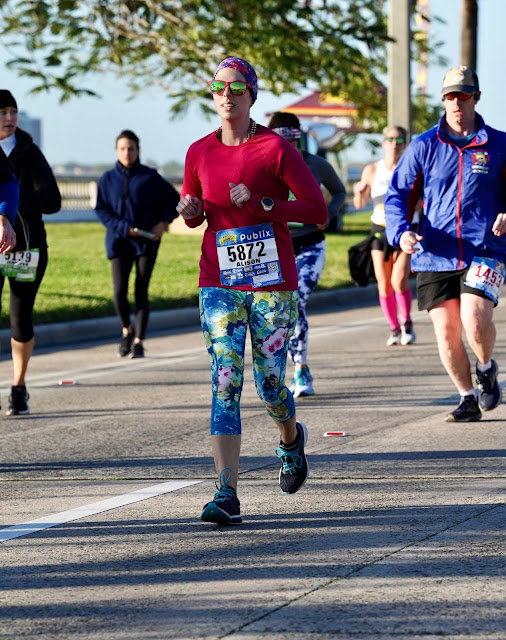 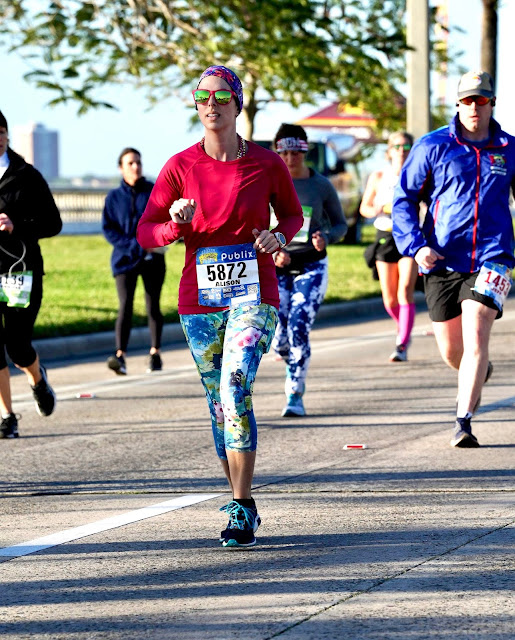 I never truly warmed up all the way on the course, which was optimal because I prefer to be a little cool rather than overheated, but at times it was really tough.

The 15k distance kind of plays with your mind, because you think you're done when you get to mile 9 but you're not quite there yet. In the last mile, though, Gasparilla never fails to disappoint. The crowds are constant; you don't want to walk with so many people around cheering for you.
The straight, flat route also gives you a clear sightline to the finish from about half a mile back. It really gives you something to work toward. 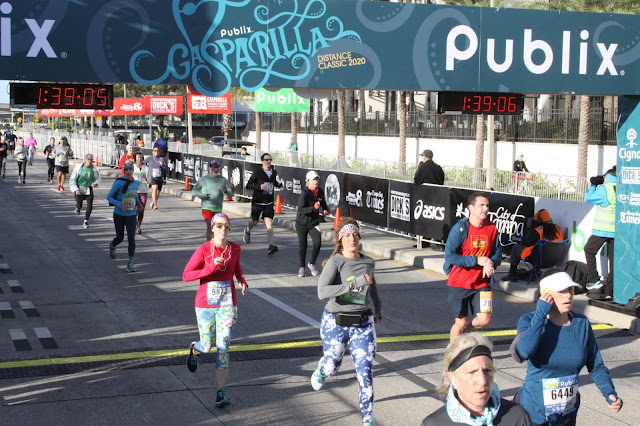 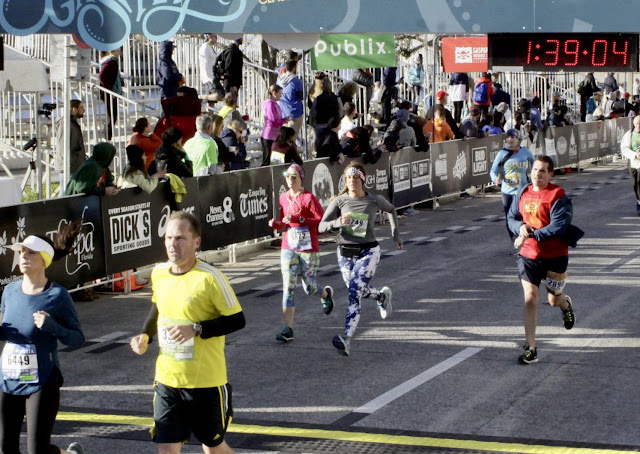 I crossed the finish line at a sprint and nearly crashed into the woman in front of me, who had slowed to a walk immediately. I was immediately freezing; the wind was up and my body was cooling down.
I found Jessie and we were both too cold to get pictures; we walked back to the car, cranked the heat, and headed home.
It was only later, after I checked my stats, that I saw how strong I had actually run. I'm amazed that I ran such a respectable race on such meager training. I can't believe I pulled it off after having to MacGyver together a pathetic excuse for a training plan! 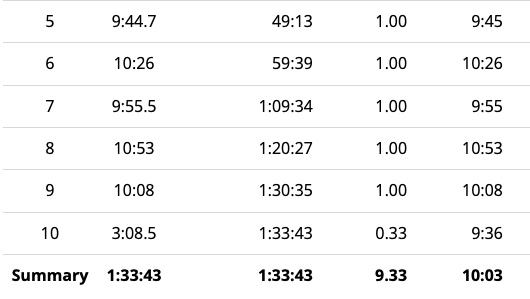 I finished in 1:34:05, which is a three minute course PR and a 44 second distance PR.
Gasparilla is always a fun race, and it was a perfect one to ring in 34. It left me with some complicated feelings about races and training and long distance running...so I'll have to explore all that later. 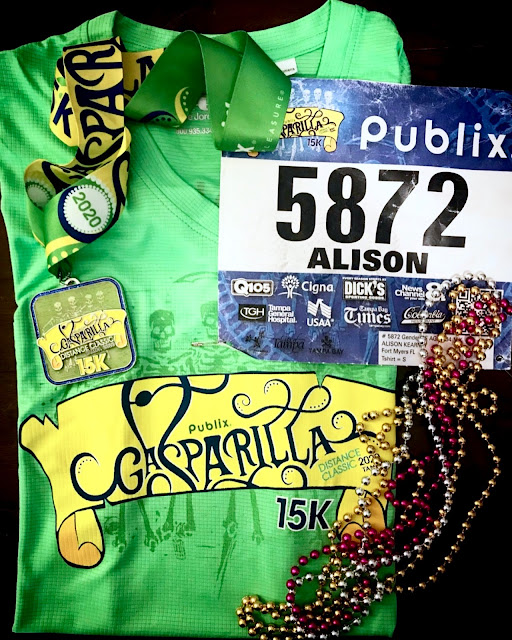 For now, I'm happy to add another medal to my collection and celebrate my first official race of 2020!