Just two weeks ago, I posted about signing up for a virtual race. After publishing that post, I immediately started planning my training runs so I could successfully run a 12k by October 18. That same week, I also connected with two women in the area and planned to meet each of them for outdoor, socially-distant get-togethers. I was branching out, facing fears, and making moves!

Then, these fires got out of control.

First of All, I'm Safe

Shortly after I moved to Seattle, a friend jokingly posted on about Facebook looking to move out of "Hell's armpit" (Florida) and taking suggestions for new places to live. I recommended Seattle, and was surprised to learn she had lived in Washington. In Spokane, in fact; she was not open to dealing with so much snow ever again!

I immediately had to do some research, because lack-of-snow was one reason we chose Seattle. It turns out, Spokane gets something like 45 inches a year, while Seattle only gets five. This was my first real lesson in how the mountains that separate east and west Washington really impact the weather. 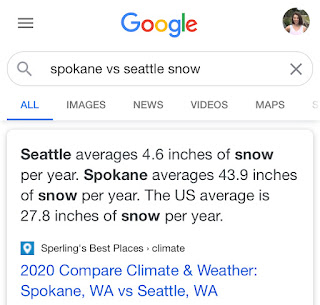 Our studio is located in Eastlake Seattle, sitting (as the name suggests) on the eastern side of Lake Union. Close by and west of us, Lake Washington separates us from Bellevue, and about 100 miles east the Cascade Range separates us from Eastern Washington, where most of the Washington fires are smoldering. 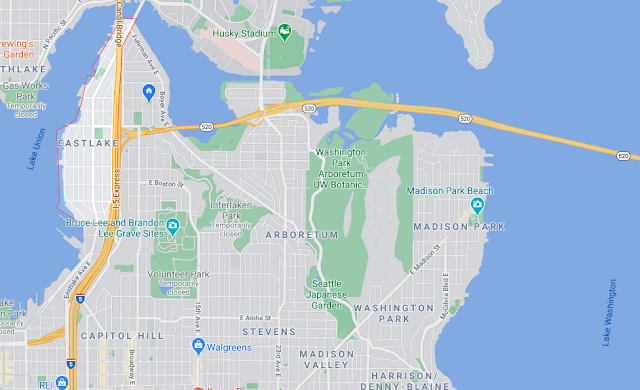 Before our trip, I hadn't realized just how much of the spectrum Washington's terrain spans. My friend Emily, who lives in Fife, had told me she was excited for me to drive through Eastern Washington because it's so different from the west. She was right; the difference is startling.

We drove through hours of flat, dry farmland, spotting dirt devils along the way, until we very suddenly found ourselves in the mountains when we finally reached Cle Elum and - more notably - Snoqualmie Pass.

Basically, we aren't in danger from fires where we are. While there are some fires south of us that wouldn't need to cross mountains and water to reach us, they're far away and fairly small. The majority of the big ones are out east, decimating crops and putting farm workers' lives in danger.

But the smoke...that's another story.

From Hurricane Season to Fire Season

I wouldn't say I didn't have any warning about fire season. I remember that last year was bad and we followed it in the news, but experiencing it has really been something else.

I've gotten used to hurricane season, although since Irma I've had some low-level PTSD whenever it comes around. I felt intense relief this spring when the first big rains came to SWFL; after selling our house, it felt liberating to not need to worry constantly about flooding and other concerns.

Living through an extremely damaging hurricane changed my perception of these storms, and living through fire season is doing the same. The option to go outdoors, our only reprieve from being shut-ins due to the pandemic, is off the table. Matt and I haven't been outside in over a week, other than quick runs to the pharmacy and the brief drive over to Scott and Robby's. We've completely cut off actual outdoor time.

Needless to say, my race training plans came to a standstill before I even started.

Washington is seeing historically hazardous conditions. Right now, our air quality is second-worst in the world, only topped by Oregon, where fires are still raging out of control. We don't have air conditioning, but we've been forced to keep our windows shut. It hasn't been hot, though; the smoke is blocking the sun and has dropped temperatures down into the low 60s. 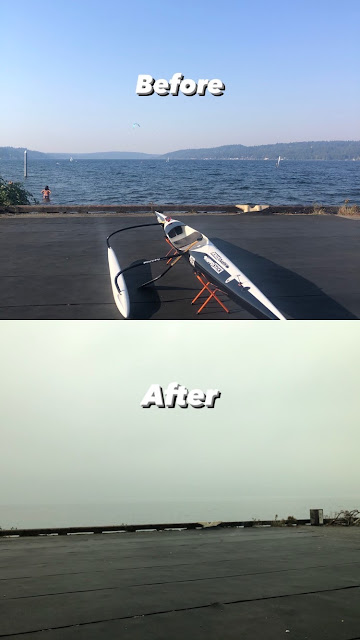 I can't speak for the people actually enduring the worst of this - those who live near the fires and are in a constant state of fear, those who are experiencing homelessness and have no way out of the smoke, those still harvesting crops despite the dangerous air quality - but I can attest to the antsy, frustrated, nervy restlessness of being cooped up inside for days on end.

The stories I've read out of California, Eastern Washington, and Oregon are heart-wrenching and horrific. The speed at which fires move, the uncertainty of their path, and their uncontrollable nature makes them, in some ways, more terrifying than hurricanes, which are fairly predictable and short-lived in comparison.

We are supposed to get rain Thursday or Friday. I hope it comes through.

We've all seen the memes joking about 2020 and what will come next, but I think we're missing something important here. 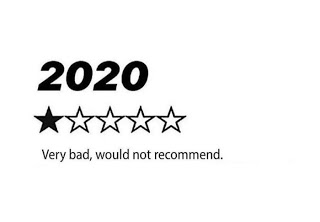 Obviously, the year isn't to blame. 2020 is not cursed. But in a way, 2020 is proving to be a culmination of decades of issues we've swept under the rug and need to address. And, to top it off, it's an election year.

This year we've seen it all: The social unrest. The racial injustice. The effects wreaked by the destruction of our environment. The science denial. The corruption and lack of transparency in politics.

Somehow, it's all come to a head. We are seeing more than ever how systematic racism, transphobia, and other prejudices have endangered lives in our country. We are seeing how global warming - exacerbated by humankind's dismissal of actionable change - is destroying lives and livelihoods. We are seeing how weak and selfish politicians have overloaded our already weakened healthcare system, leading to nearly 200-thousand (and rising) painful, preventable deaths by ignoring science and letting this virus run rampant through our country.

Hindsight is 2020, right? This year has brought things into focus that maybe you were able to ignore in the past. Maybe this is your wake-up call. We can't let things go the way they have been, unchecked and dismissed, for another four years.

So yeah, this is all to say...We need to get out and vote November 3 and we need to dedicate ourselves to making a change that will last long term. Any improvement will be monumental and life-saving at this point; we can worry about political purity tests when the world isn't literally on fire. For now, let's do what we can with what we have and where we are.