There's a difference between knowing something and knowing something. When we made the decision to move to Seattle, I knew I was going to be tackling a completely different world of running - trading hot, sticky weather for cool, gray skies and flat, smooth sidewalks for killer hills. I knew it, but I didn't know it.

I hadn't fully internalized or realized the significance of these changes until we got here. As I've finally gotten into running more consistently and have found a routine, some of the changes have been expected, but some have been a bit surprising.

Well, mostly everywhere. This was actually the thing I was most mentally prepared for but the least physically prepared for. I knew my Florida-legs would need to adjust, but I didn't take my lungs into account, and I underestimated just how ubiquitous hills are.

My neighborhood is built in tiers, starting at the top of a hill and sloping steeply downward toward Lake Union. We are on the second level, one street up from the waterfront. That means if I run from my front door, I'm immediately faced with some of the steepest hills I've ever seen outside mountain ranges. I've never even attempted to run up (or down) these bad boys.

I can walk up to the streets above us - the residential streets run north to south and are generally flatter than the streets that actually go uphill, of course - but I've quickly learned that "flat" anywhere outside Florida is a lie. Even tiny baby grades have been testing my legs.

The first few times I tried to walk up to the street above ours, I got winded. From walking. (I can tell I've acclimated some because this same walk barely slows me down now!)

The parks I enjoy running in are less steep but provide a different challenge: rolling hills. I've found that even when my legs can conquer two or three hills in a row, my lungs can't. I've been struggling with how this new terrain elevates my heart-rate and triggers my asthma, but I can tell I'm slowly acclimating.

The nice thing about hills is that they're secret speed work. I don't have to seek out a bridge for dedicated repeats anymore, and I know in time I'll be a stronger runner than ever before.

Luckily, I have been able to find one flat route. It's nice to have the option when my legs need a break.

Before we moved, I went through my stash of race shirts and parted with more than half of them. All the cotton ones had to go, of course, but I got rid of some tech tees, too. After all, we were downsizing drastically and I never wear t-shirts!

When it's hot, I wear tank tops. When it's cool, I wear long sleeves. I've hoarded race shirts for sentimental purposes but I very rarely wear them for running.

That's not the case anymore! I've suddenly discovered why tech tees are a thing. They strike the perfect balance when it's too cold to start a run in a tank top but too warm to finish one in long sleeves. I can't believe my hoarding has been vindicated! Tech tees have become a wardrobe staple.

It gets dark early

This feels like a no-brainer, but like...when people say it gets dark by 4:30pm, they mean it. I've had to learn to run in the middle of the day or in early afternoon because I haven't found a route with good visibility for evening runs yet.

I knew it would get dark early, but I had honestly forgotten that dark doesn't mean dusk. These days, it's fully nighttime by 5pm, and I'm not at all used to that yet!

What even is "cold"?

I'm amazed at how quickly I've adjusted to the temperatures here. One reason Matt and I chose Seattle was the weather; we were excited for weather akin to our winter experience in Edinburgh, but I had forgotten that after a few days of mid-40s, you just kind of get used to it. In fact, it starts to feel kind of perfect.

If you've been following my Instagram stories, you know it took me a few runs to figure out when to ditch short sleeves for long, but I think I've adjusted now. When temperatures drop into the 50s in Florida, I'd bundle up. Here, I'm still running in shorts!

That said, I haven't quite adjusted to running in cold rain yet. I love a drizzly run, but it's hard to get out the door when the weather makes hot chocolate and fuzzy socks so welcoming.

Luckily, the rain hasn't been as unrelenting as people would have you believe. (And this, I think, is a Seattle secret.) We've had at least a little sun every day, and only a few days now when the rain was so heavy that I opted to workout indoors instead.

I know I'll get into the cold-rainy-run mindset eventually out of necessity, but I just haven't had to yet.

I'm still in awe of the scenery

I'm a broken record on this topic, but I just can't help it. Fall has been everything I wanted it to be, full of deep, rich reds and glowing yellow leaves so bright they're nearly neon. I can't get enough of the crunch of leaves underfoot.

I'm half expecting the endless gray of late fall/winter/spring of my Cleveland childhood, but so far that sterile slate has been absent. The sky is blue and bright, even when obscured by clouds. The trees are vibrant. The grass has remained lush and green, and typical Seattle winter lacks the killing frost that would turn it brown. 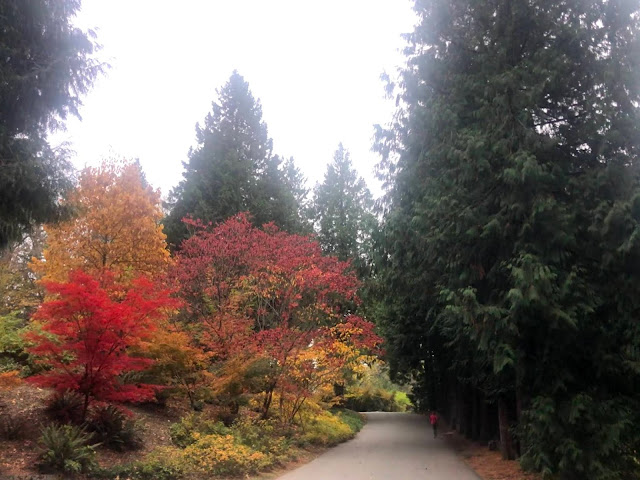 I know the leaves won't last forever, but the abundance of conifers promises that even as the days grow colder and drearier, there will be green to enjoy.

I really hope I never get tired of the sight. Right now, every run is a feast for the eyes.

I miss running with Elizabeth. We keep each other constantly updated on our weekly workouts and everything else in our lives, but I miss having a running buddy.

That said, I'm never alone on a run here. Seattle is full of runners. In Florida, passing another runner was an event to comment on later. Like, "Oh, I saw this girl! We waved! It made my whole run feel special!"

That's not the case here.

I've seen at least half a dozen runners, usually more, on every run. Maybe it's the stellar running weather. Maybe it's the influence of Brooks headquarters. Maybe Seattle just attracts outdoorsy, active people.

Whatever the reason, seeing fellow runners is no longer a rarity. It's nice to feel like I'm never alone out there, but at this point I'm not even sure if a friendly wave is necessary. Do you need to wave, nod, or smile in solidarity when your community is so big? It's a secret handshake of sorts, meant to convey an encouraging, "I see you, getting it done! Good job, runner!" Does it now make me stand out as an obvious transplant to the area?

I've run in different places when traveling, and that includes winter runs in Cleveland, Vancouver, and yes, Seattle. Still, it's a totally different experience when it becomes part of daily life. Three months into our move, I'm beginning to feel more settled, but I'm also still learning to adjust.

Right now, I'm mostly grateful for cool running weather. I'm sure by the time spring rolls around, I'll be desperate for some warm summer runs. For the time being, though, I'm going to continue enjoying autumn and learning how to conquer hills. It's all part of the adventure!