Tomorrow is my birthday.

I know I've said it before, but it's hard to talk about aging without repeating this: I never felt sad about hitting 30. Even though I grew up on sitcoms that made a big deal out of turning 30, and these days we're inundated with memes about how age starts to catch up with us when we've said goodbye to 29, I felt like being in my 30s was kind of great.

The memes make me laugh, but I didn't really relate to them, maybe because I didn't feel 30...or 31, 32, 33, or 34. Mentally, I've felt 28 for the last four years. Despite 2020 being a total shit-show, I didn't feel my 34th year was wasted, especially because I finally fulfilled my dream of leaving education and moving to Seattle. 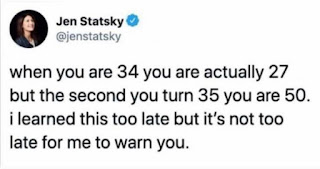 I love being in my 30s. I feel like I truly know my own mind — I know who I am and what I want, and that knowledge has made me more confident than ever. And you know what goes hand-in-hand with confidence and self-awareness? Well, you really stop caring about what other people think. It's a totally wonderful kind of freedom.

I've spent the last few months exploring who I am without the pressure and distraction of a stressful job clouding my thoughts. I took a self-imposed sabbatical (that's what I'm calling six months of unemployment during a pandemic and cross-country move) that gave me perspective, balance, and a renewed sense of what I want from my life. Generally, 34 was pretty great.

But around November, things started to feel different. I realized I'd be 35, truly mid-30s, and for some reason, that was scary. And, because I'd never before dreaded a birthday, I spun out a bit. I began to worry that this fear and unhappiness would be the new norm, and that I'd never enjoy a birthday again.

I went into hyper-awareness-mode. I started to notice that I'm getting wrinkles, despite using retinol and sunscreen religiously since I turned 25. I'm noticing some changes in my face that I didn't expect to see, seemingly overnight. I honestly think I'm the fittest and strongest I've ever been, but I also realize I'm entering the age where women start to become invisible. Some women embrace that, because they no longer feel they have to perform for society and can finally be comfortable being themselves, but after a year of being cooped up in the house and the start of a new career, I don't welcome invisibility.

And honestly, I think part of what made me start to feel old in November was the culmination of years of exhausting, brutal, depressing politics that left me in a state of constant stress and fear.

We are still living in uncertain times, but I have hope that year 35 is going to feel a little less apocalyptic than 34 did.

So, looking ahead to my birthday, I want to focus on the good: a new era in government that will hopefully usher in some real social changes; a new location; a new career; and feeling healthier and more fulfilled than ever.

My intention for this year is to fully embrace the new attitude and energy I discovered in the latter half of my 34th year. This is a year of newness and growth. It's a milestone year, and I want to make it all it can be.

Email ThisBlogThis!Share to TwitterShare to FacebookShare to Pinterest
Labels: 35, birthday