Finding an in-person Turkey Trot was tricky this year, but not impossible. In the end, I had two choices: a brand new route or another 5k around Green Lake. While running in a new place was tempting, I liked the idea of being able to compare like-to-like to see if I'd progressed since the 5k I ran last month. (That route was a little short, so I was hoping for a faster pace but not necessarily a faster time.)

Matt decided to run it too, seeing as we're that annoying family that runs on Thanksgiving, after all.

We got to the park around 8:45am and picked up our bibs. The weather was cold and windy, but luckily the rain was holding off. We met up with Sarah and did a little warmup jog, but I was beginning to regret not wearing ear warmers and a heavier top.

When it was finally time to line up at the start, Matt went ahead of us in the corral. My goal was to keep a pace between 8:30 and 8:50 but I forgot to actually set the workout on my watch, so I had to just go by feel. And really, I was feeling pretty damn doubtful, despite having a good six weeks of work under my belt.

The first half mile or so felt much harder than it should have. My quads felt cold and heavy even after our warmup. Then I noticed we were keeping an 8-minute pace. Oops.

We reined it in a bit and I finally started to feel warm. I never felt good and the pace never felt easy, but that's 5ks for you.

What's there to say about a 5k? You dig in and commit to the pain, but luckily it's over in less than 30 minutes. I've run Green Lake so many times, I barely had to concentrate; I just focused on picking up my feet. The few little "hills" on the route, which usually don't even register, felt like mountains.

I started to really flag about halfway into mile two, and pulled the pace back again. The inner loop around Green Lake isn't quite three miles, so to add mileage they led us out and around the perimeter around mile 2.8, and when I say I wanted to take a walk in that last third of a mile, I really mean it. The only thing that kept me moving was wanting to keep up with Sarah, who was just ahead of me.

As we turned down the path back toward the finish line, I somehow found some energy to give myself an extra kick. (Seeing someone over my shoulder will do that for me! I refuse to be passed in the finishing chute!)

While my gun time puts my pace at 8:54, my chip time and Garmin very satisfyingly show 8:50, and that's what I'm going with! I barely met my goal, and given how uncertain I was the entire time, I feel pretty proud! 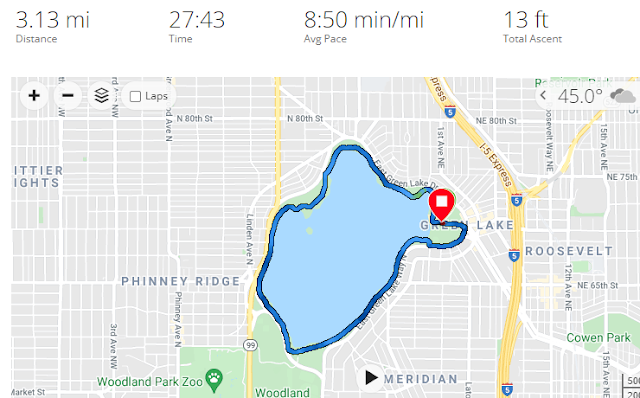 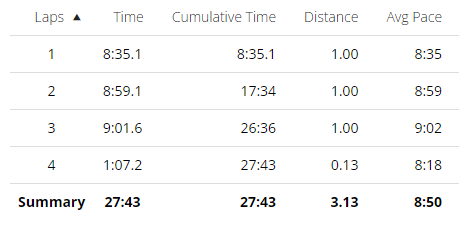 I came in 7th in my age group (the woman I held off in the finishing chute crossed the starting line 1 second ahead of me, so even though I edged her out at the end, she still technically beat me. Curses!), 30/100 women, and 70/197overall. Not too shabby!

After the race, we took some photos and waited for age group awards...until we realized the fasties at this race finished a good five or six minutes head of us. Sometimes I think "small race" means "less competition", and I've only ever placed in my AG at races with a couple hundred people or fewer, but I seem to forget that Seattle is a running town and people are fast. 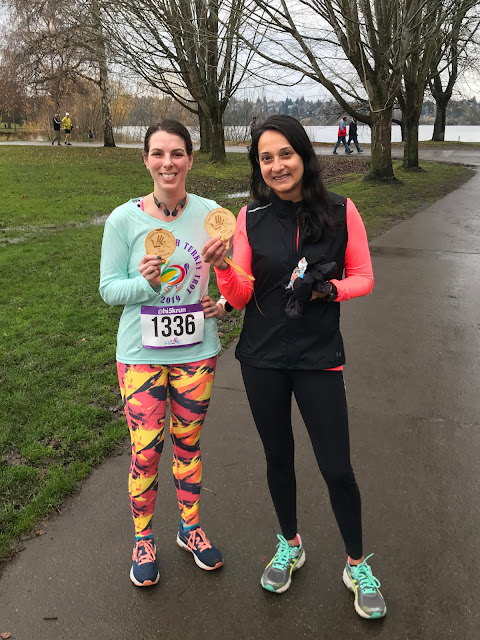 I don't have another race on my calendar this year, so this may be the last of 2021 for me. Considering COVID had me thinking I might never race again, I can't say I'm disappointed. It's a good way to end the year.