Since January, I've been trying to write a post exploring how my mindset has shifted regarding fitness, strength, and running, but I've had the hardest time framing it. It's just such a huge topic. But after my last 10k, it seems apropos to talk about how I managed a significant PR in that distance for the first time in 10 years.

The shift in mindset is absolutely to credit for that accomplishment, so...consider this topic duly framed.

First, some context. My PR at the My Better Half 10k (MBH) was unplanned. I did not have a goal for the race at all. During the race, I didn't feel I was overexerting myself; I wasn't sticking to any sort of pace or run/walk pattern. I ran it entirely by feel. It was a challenging course in that the hill at the start could have eaten up a lot of my energy and ambition, and having run a nearly-identical route in the same park about 3.5 months previously, my anticipation of the hill could've been a setback.

Actually, that similar 10k gives me a perfect comparison for how much I've grown in the fifteen weeks between races, and that growth comes down to a newfound dedication and commitment to strength and movement.

So, let's follow this journey. If we're using the 10k as our measuring stick on my progress right now, we have to start in 2012.

My 10k PR from 2012 was at the Sanibel Race for FISH 10k. I've run that course enough times to remember that it's flat and easy, but also that the humidity and lack of shade always played a huge role in how I performed. The first time I ran it and earned that PR, I finished in 58:41, with a 9:27 pace.

I've run a lot of 10ks between then and now, but I've never come close to that time again. I always seem to hover between 60 and 62 minutes.

On Halloween 2021, I ran the Run Scared 10k. The course was significantly short at 5.9 miles but it had the same start as the MBH 10k. According to my watch, I finished in 58:21 with a pace of 9:51. (The official record of this race, erroneously measuring the distance as a full 10k, has my pace at 9:26, which is quite comparable to my previous PR but isn't actually accurate based on the distance.)

I noticed that I was running stronger than I have in other recent 10ks, but the race felt like work. A month or two ahead of this race, I had just started to get consistent with long runs, cycling, and strength training.

For the MBH 10k, the course distance per my watch was 6.15. I'm willing to call that a true 10k. My time was 57:12 and my pace was 9:19. Even before I knew I was earning a PR, I could tell I was running faster, steadier, and with way fewer walk breaks than back in October.

So, how? It really boils down to something I always knew mattered but never made the time for: consistent strength training. 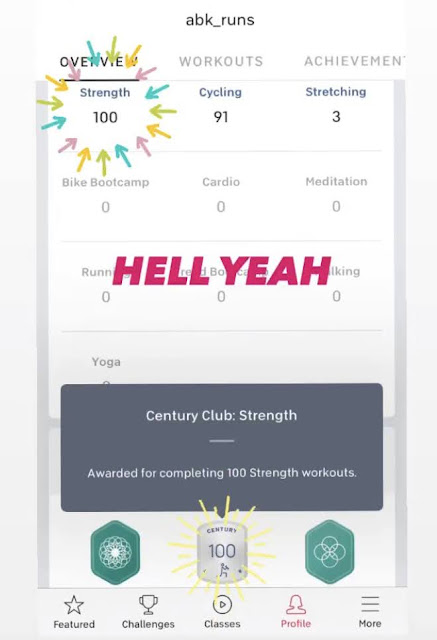 Has my consistent running made a difference? Of course. Running hills, simply because they're unavoidable here? Yep. Doing long runs every weekend? Sure. But the truth is, none of that is new. For the past ten years, I have always (well, almost always) kept a consistent running schedule, incorporated bridges whenever possible, and run long weekly. The only truly new factor was my incorporation of riding the Peloton once a week and doing strength training 2-3 times a week. Like clockwork.

I still have to stop and wonder how the shift in mindset happened. I've tried to incorporate strength training in the past but it never stuck. Why is this time different? Is the answer really as simple as: Peloton is fun and kind of culty, and it's doing the trick? 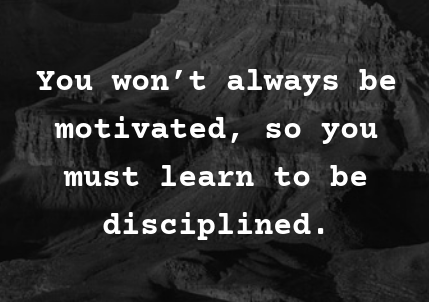 A couple years ago, I came across this piece of advice: You won't always be motivated. Learn to be disciplined. I don't particularly like the connotation of the word "disciplined" — I like "dedicated" instead — but the quote resonated with me and struck me as true. I've had it in my head for years, and I wanted to learn to be disciplined but wasn't sure how do go about doing it.

The answer ended up being so simple it's annoying: I started to keep a calendar. A whiteboard calendar front and center on the fridge, actually, so that it was never something to forget or ignore and could be easily updated and changed every month.

At first I kept it blank and only added in the workouts I completed. That was motivating without creating pressure, when I was struggling mentally last spring. But when I started joining group runs and following the HCotF Peloton calendar, it made sense to be proactive and to start planning my workouts ahead of time for the entire month.

Looking at a month at a time, rather than week-by-week, gave me both focus and perspective. Missing one workout in 7 days felt defeating, but missing one in 30 was no big deal, and suddenly I could move on from "failure" without wallowing in it. At the same time, I missed fewer workouts because they were already scheduled for me!

I started keeping the more detailed calendar around September and from that point on, motivation stopped being a factor entirely. Discipline — dedication, commitment, whatever — took over.

It was a subtle change. Rather than feeling like I was making good decisions, I felt that there were no decisions to be made. I didn't keep the schedule; the schedule was kept. In a way, it felt a little out of my hands. That I would do my workouts was a forgone conclusion.

I can't remember ever feeling this way before, where working out has become a no-brainer and I'm truly enjoying it. Where I'm working out six days a week and staying consistent. Where I can actually track my progress in ways that matter: the weight I'm lifting, my pace on my easy runs, the definition in my biceps.

Over time, as I checked off workout after workout, week after week, I began to see growth like never before. I began tracking NSV —  non-scale victories — and was amazed at what I was accomplishing. 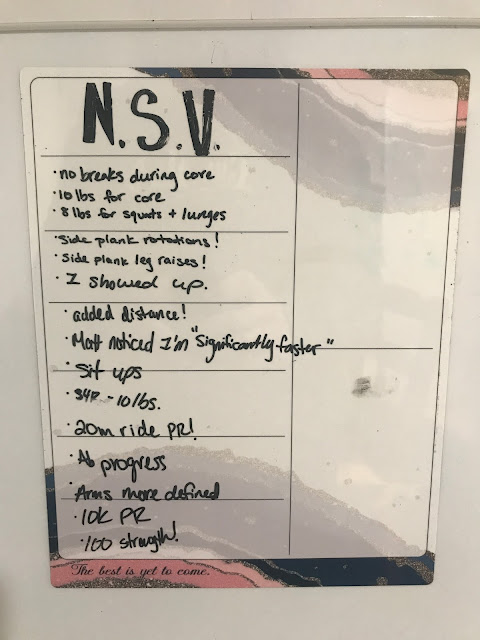 This new mindset has been consistent and sustainable for me for about six months now. The routine took about six weeks to become habit. It took approximately three months for me to realize I had developed a new relationship with and attitude about working out. Four months in, I finally started to notice real progress, and it wasn't until a week or so ago that I had a chance to step back and realize, holy shit, this is really paying off.

So basically, patience was key.

Seeing my strength and stamina increase, I'm reminded of another quote I saw ages ago that stuck with me: fall in love with the process, and progress will follow. I feel like, for the first time ever, I'm truly there.